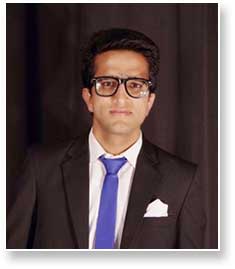 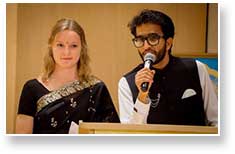 Hosting an awards ceremony at MUM in 2017

With the MUM Student Government

Waqas Hussain earned his bachelor’s degree in computer science from Air University in Islamabad, Pakistan. After graduation he worked as a software engineer on a variety of projects, including a system to recognize different stages of Alzheimer’s disease, a tomato and potato plant disease-detection system, and an electronic voting platform designed to eliminate electoral fraud.

While traveling in the U.S. Waqas visited MUM and, after talking to professors, decided to apply for the Computer Professionals Program. He was persuaded by the program’s focus on the practical versus the theoretical aspects of computer science. “I like that the faculty keep us up-to-date with whatever is new in the industry,” he said. “They also focus on what’s good for the students and help us with writing resumes and finding jobs.”

Waqas was impressed by how much he benefited from the practice of the Transcendental Meditation® technique in terms of his creativity and focus, so he decided to demonstrate its efficacy with a mathematical equation. He presented his theory to President John Hagelin and the MUM senior faculty and was encouraged to continue his research.

Waqas calls his equation the “Transcendental Equation” which describes the seven states of consciousness, including the process of experiencing pure consciousness. In addition, he is working on an article with MUM Professor Cathy Gorini on relating the Transcendental Meditation technique to principles from mathematics and computer science to be published in the International Journal of Mathematics and Consciousness.

“Waqas has a deep appreciation for his daily practice of TM; this, along with his penetrating understanding of computer science, is the key to his success,” said Professor Gorini. “I am looking forward to his work connecting the science of consciousness with the science of computers.”

During his eight months on campus, Waqas also served on the MUM Student Government as the representative of the Computer Science Department.

Last November Waqas started his curricular practical training with a software company in Princeton, New Jersey, where he is working on a robot capable of carrying out a complex series of actions automatically. He is very enthusiastic about the TM® technique and shares his experience with everyone he meets. He hopes to continue his research on the TM equation and return to MUM.