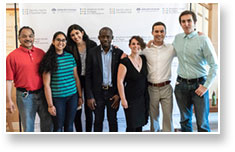 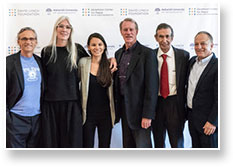 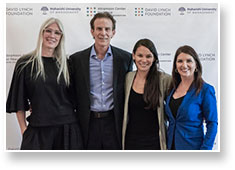 On June 8 MUM held another successful ChangeMakers event, this time focusing on “How to Manifest Your Great Ideas.”

The morning event, “Becoming a Transformative Entrepreneur,” opened with Kevin Harrington sharing secrets of his success via Skype. He is the inventor of the Infomercial format and one of the original “sharks” on the hit TV show Shark Tank. Kathryn Frazier, known as the “rock star whisperer,” whose clients include Justin Bieber and Lauren Hill, spoke next about her journey of building a successful PR business in the music industry and becoming a life coach. Former London financial trader Mar Michelle Häusler talked about her path to social entrepreneurship. (Read more about the guest speakers here.)

The afternoon session, “Becoming a Big Fish,” took the form of a Shark Tank-like event, where five students pitched their business ideas in three minutes. Presented by MUM’s Concept to Market Institute, the session started with a keynote speech by special guest Joe Sugarman, copywriting and direct marketing legend.

The first prize of $1000 went to Corine Brooks, who presented her project called Sustainable Roots Therapeutic Ranch. Maharishi School student Sophia Malik took the second prize of $750 for her idea of an education exchange website that would match up tutors with students. Third, fourth, and fifth place winners were Ben Soukup, Musiliu Bolaji, and Jeremy Erdman, who each received $500. In addition, each of the five students and the two alternates (Shristi Sharma and Anthony Hernandez) received a $500 scholarship to MUM.

“I think the event was wonderful!” said Corine Brooks. “It was a great experience and an opportunity to show what I’m working on for the community. Sustainable Roots Therapeutic Ranch is getting the community support I hoped to receive, and this event helped move it along.”

In addition to the main event, students organized a ChangeMakers Month with a series of workshops to help students take practical steps toward realizing their dreams. Students who helped organize the month were also part of the Saturday event, introducing speakers and interviewing them.

Watch the individual talks and the full-length event videos here.