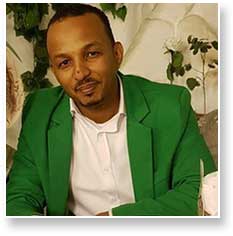 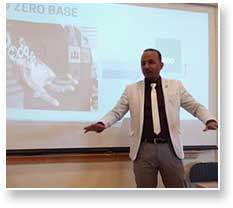 Giving a presentation in class

With classmates and Professor Tom Palladino 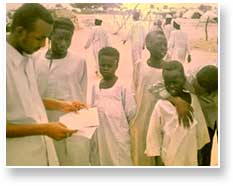 Helping refugees from Darfur in 2004

MUM student Suhaib Mohamed holds a bachelor’s degree in economics from Al-Neelain University, Khartoum, Sudan. After coming to the U.S. in 2015, he was looking to expand his education towards sustainability, and when he discovered MUM’s MBA in sustainable business program he thought it was the perfect fit.

Suhaib says he met the greatest people at MUM, whom he considers his brothers from all over the world. He feels that all of his fellow students care about the future of the world and want to create change. He was also excited to discover the Transcendental Meditation® program. “I was looking for something like it, but didn’t know what it was, and I clearly found it here,” he said. “I wanted to connect to my Self. The idea of consciousness is a great idea; it connects us to all the human beings around the world.”

Suhaib is now working on his capstone project, which is a business plan in collaboration with the Center for Worker Justice of Eastern Iowa (CWJEA) in Iowa City, where he lives. His plan is to create a kitchen co-op for immigrant business owners to share a kitchen to run their restaurants or food businesses. The co-op would reduce the start-up costs for entrepreneurs and allow them to train others how to cook. In the fall, Suhaib will also be doing an internship with the CWJEA, which helps low-wage workers achieve social and economic justice.

Suhaib has always been concerned with social, economical, and political issues. In 2004 during the Darfur crisis, he was part of a volunteer youth group helping deliver supplies and food to those displaced by the war. Prior to coming to the U.S., he had a weekly television program on Sudan TV discussing youth-related issues. For his efforts to impact the lives of young people, he received the 2014 most influential figures of Sudan award and the 2016 Jack Bakhit Encouraging Award.

After graduating from MUM, Suhaib wants to continue serving his country because he believes that is the best way to use his education. With his skills and knowledge of the media, business, sustainability, and social justice he wants to improve the lives of people and inspire them to stay in Sudan and reduce emigration.