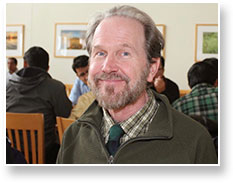 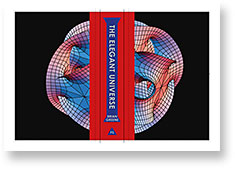 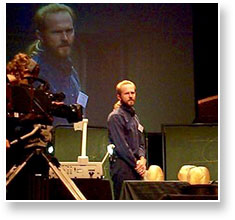 Lecturing at a symposium on “Art and Mathematics” in Maubeuge, France, 2000
(Photo by John M. Sullivan)

Stewart earned a Bachelor of Electrical Engineering degree from the University of Delaware in 1981, where he also took classes in electronic music, drawing, sculpture, visual design, and optics. For his undergraduate thesis, he developed and patented a stringed musical instrument with electrical feedback.

Since then, Stewart has combined his computer skills with his interest in science, graphics, and animation to create visual effects at Walt Disney Animation Studios, design a software to visualize biomedical data, and build computer graphic tools for the National Oceanic and Atmospheric Administration. Since 2011 he has been working for WolframAlpha, the online computational knowledge engine, which answers factual queries directly by computing the answer from externally-sourced curated data.

Stewart learned about MUM in 2012, when a university editor contacted him about using one of his computer graphics for a presentation by MUM President John Hagelin. Later the editor sent Stewart a copy of the proceedings of the symposium on Consciousness-BasedSM education. After reading the book, Stewart was convinced. “All the science is logically sound; all the philosophy is logically sound here.”

Stewart has always wanted to attend graduate school, but he also wanted keep working while going school. MUM’s ComPro Program was a great fit because he could take most of his classes via distance education and keep his job.

“I really like the theory of computation blended with the Science of Creative Intelligence®; I find it very interesting,” he said. “As we start building quantum computers, I think we are going to learn a lot about the interface between information theory and quantum physics. And that really is the language of natural law.”

Stewart’s interest in computer science and the science of consciousness recently spurred him to write a paper about the convergence of computational theory and consciousness, which he intends to publish in the International Journal of Mathematics and Consciousness.