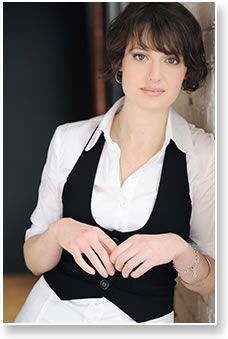 MUM student Sophia Woodward had wanted to become an actress since she was nine, but she never thought she would get some of her best acting opportunities in Fairfield, Iowa.

Sophia moved to Fairfield from Massachusetts at age seven and attended Maharishi School. At age 18 she moved to British Columbia, where she finished high school. She decided to pursue acting professionally, and soon enrolled in a six-month certificate program at the Vancouver Academy of Dramatic Arts. 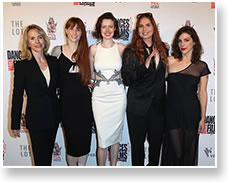 During the next 5 years, Sophia auditioned for television, indie movies, and commercials while working a day job at a Western martial arts school, where she picked up swordplay. She also performed in theatre productions, including a play she wrote and co-produced at the Vancouver Fringe Festival.

In 2014 Sophia heard about an MUM course on “the creative process,” taught by Nynke Passi. She became so intrigued that she came all the way from Vancouver to attend just one class. It wasn’t long before she decided to become a full-time student in media and communications. 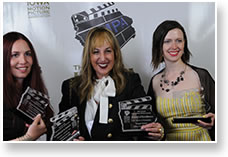 With director Monica Demes and Joanna Plafsky, co-founder of the DLMFA, at the 2016 Iowa Motion Picture Association Awards

In addition to attending classes and learning about creative writing and filmmaking, Sophia has secured multiple roles in student productions of the David Lynch MFA in Film Program. She was cast in three films and a web series, including the lead role in the feature film Lilith’s Awakening by Monica Demes. For her role in Lilith’s Awakening, Sophia received the Best Actress award from the Iowa Motion Picture Association in 2016.

“Sophia is a subtle writer, but her most outstanding work is always in performance, or a combination of writing and performance,” said Nynke Passi, assistant professor of creative writing. “She has the ability to access her emotions readily and deeply, spur of the moment, without defense. It’s entirely genuine — an unguarded connection to self that not everyone can make palpable before an audience.” 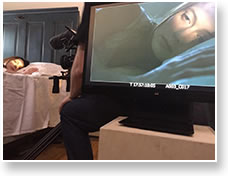 Behind the scenes of Lilith’s Awakening

In between her classes, Sophia has been globetrotting to attend premieres of Lilith’s Awakening in Los Angeles, Sweden, and Montreal. She hopes to attend two upcoming premieres in England and Argentina.

Sophia feels that the Transcendental Meditation® program has been an essential part of her life. “TM is my rejuvenating mini-vacation from stresses that arise from the daily activity of my very full life,” said Sophia. “It gives me the deep rest that I need to be wholly creative and enhances my clarity, helping me to achieve my goals.”

Currently, Sophia is completing a media project for her undergraduate degree, a dance/mime short film, which she wrote, directed, and performed. To find out more about Sophia’s adventures, visit her website.