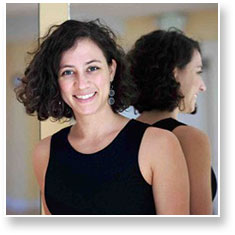 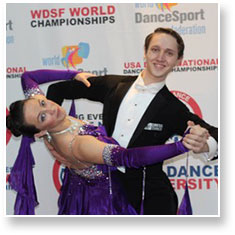 With her dance partner Dillon Hanson at the USA Dance National DanceSport Championships 2016, where they took 3rd place in the Amateur Adult Gold Smooth category 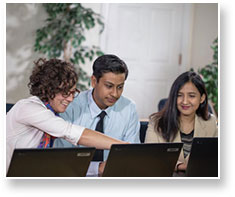 In the MIU classroom with fellow students

Sophia grew up in Fairfield and, after graduating from Maharishi School, earned a BS in industrial engineering with a minor in computer science from the University of Iowa. Then she worked as a software developer in Madison, Wisconsin.

While studying at the University of Iowa, Sophia joined the Hawkeye Ballroom Dance Company and traveled and competed around the country. She continued dancing after graduation, and in 2016 she decided to focus on her competitive dancing. She and her dance partner moved to Fairfield and both began teaching math part time at Maharishi School. They dedicated their time outside the classroom to practicing their dance routines and competing in regional and national championships.

During this time, Sophia began to analyze the dynamics of partner dancing in terms of leading and following. She realized that the leadership and communication skills present in dancing are transferable to other social interactions. She said that her experience with Consciousness-BasedSM education and learning the universal principles of the Science of Creative Intelligence established a habit of thinking that later helped in her discoveries in dance.

“This process of recognizing patterns and relating them to ideas, or even disciplines, is the foundational skill that allowed me to start this entire process,” said Sophia. “I looked for underlying principles that govern dancing, and in recognizing them I noticed that they are also true in other areas of my life.”

Sophia is currently teaching several weekly dance classes, where she is using the principles she has discovered to eventually develop a curriculum that she can take into a tech and corporate environment. “My desire is to take partner dancing in a loose form as a platform for developing conversations around body language, consent, communication, and respect,” she said.

Sophia is graduating in August and hopes to find a job as a software developer and continue to refine her dance-inspired leadership program.