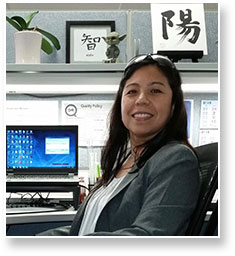 Shiana Tea, MUM alumna of ’17, in her office at Dresser-Rand/Siemens 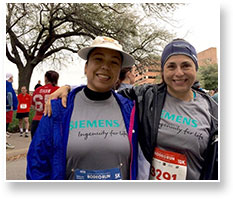 With a coworker at the Houston Rodeo Run, an annual benefit race 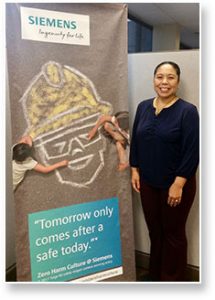 At a Siemens conference

MUM alumna Shiana Tea graduated from the Instituto Tecnológico y de Estudios Superiores de Monterrey (Monterrey Institute of Technology and Higher Education) in Mexico with a BE in electronic systems engineering and an MS in automation and control engineering. In 2012 she was offered a software engineering position at Houston-based Dresser-Rand, an engineering and manufacturing company now owned by Siemens.

Shiana had practiced Zen meditation and Qigong and, in 2014, she was introduced to the Transcendental Meditation®technique by a friend. “It was something completely different from other things I have tried before,” she said. “It is really simple and effortless.” Shiana enjoyed her TM® practice and when she decided to study management in 2015, she checked out MUM’s Online MBA in Sustainable Business.

Having been promoted to a leadership position, Shiana wanted to cultivate her managerial skills. She chose MUM because it was ranking high as one of the most valued online MBA programs. She also liked the curriculum that offers a well-rounded education taking into consideration the social, environmental, and human aspects of business management. “The professors were not only good subject matter experts in their respective fields, but they had a holistic approach which made a big difference,” she said.

The managerial skills Shiana gained during her MBA complemented her previous technology-oriented education. She had no previous experience in finance, so she has greatly benefited from the theory and case studies in class, which now enable her to manage a budget.

Shiana was promoted twice in six years and is now an engineering manager, overseeing a team of 27 people. Last year she was selected to participate in a one-year leadership training at Siemens as one of their top talents. In the future, she plans to further improve her leadership skills to motivate people and help them grow.