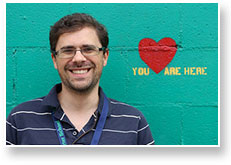 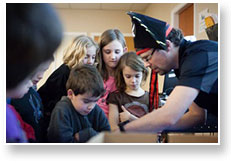 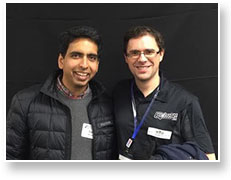 With Salman Khan, education innovator and founder of Khan Academy 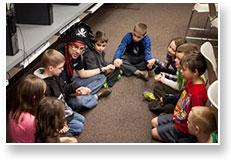 In the classroom at Anser Charter School

Richard Incorvia earned his master’s degree in education from MUM in 2005. At his first job as an English teacher in an Iowa public school, he quickly learned that students don’t retain knowledge well if the learning experience is boring. That’s when he started having students create videos, posters, and plays, and so his journey in project-based teaching began.

When he joined Maharishi School in 2007, he continued with innovative ideas and found that the school was very supportive. In his middle school journalism class, for example, students created and produced their own newspaper and radio show. Richard also discovered that doing authentic work was just as important as working on projects, because it empowered students.

“Students need to see the intrinsic value of what they are learning and how they are performing a service to someone,” said Richard. “When they see the positive effect in the world around them, they grow as people.”

Richard found that MUM’s education program provided a good example for him to follow. “Everything I did was exciting and it mattered, and they treated me as a colleague,” he said.

In 2015 Richard began teaching STEM, an interdisciplinary approach to teaching science, technology, engineering, and math at STEMBusUSA, an outreach program that brings STEM to schools. Since 2017 he has been teaching STEM at Anser Charter School in Boise, Idaho, which uses the Expeditionary Learning model, one of the major influences on Richard’s teaching career.

Richard sees his own path as a teacher as an example of what modern education needs to accomplish to prepare students for the real world. “We need people who are flexible, who can do anything, who can adapt quickly,” he said.

Practicing the Transcendental Meditation® technique since childhood has also contributed to Richard’s adaptability. “TM is a daily reminder to me that what happens inside directly affects the outside world,” he said, “and that should also be the purpose of education. If we are working from the internal world, our life can be happy.”