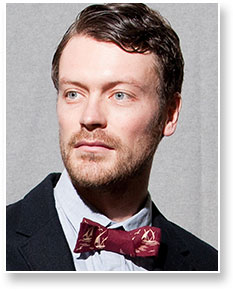 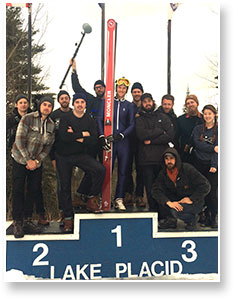 With crew and cast on the set of a Moncler promo video at Lake Placid, NY 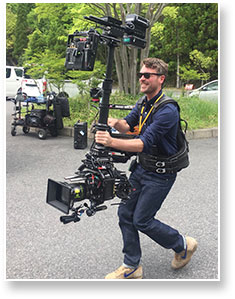 Testing a Steadicam rig in Kyoto, Japan, for a Louis Vuitton project

As a business and digital media major at MUM, Andrew Runkle got swept up in the world of filmmaking early on and never looked back—thanks to his MUM friends who were in the film program. Andrew is now a successful video producer, with a short film that made it to the Sundance Film Festival.

After graduating from MUM in 2003, Andrew moved to New York City and began looking for film production jobs. Working with various production companies, he freelanced his way up from production assistant to production coordinator and eventually producer. He has worked on a variety of media, including Indie films, commercials, documentaries, animation, and music videos. Recently he produced several big-brand commercials, such as a Gatorade spot, that featured celebrity athletes, including Michael Jordan.

“I get a lot of fulfillment from seeing a project realize from start to finish—being able to bring something to life and see that come to fruition in a relatively short amount of time,” said Andrew. “And then seeing the commercial on TV is a nice bonus.”

Last year Andrew got the opportunity to produce his first narrative short film titled “Cecile on the Phone,” which was screened in competition at the 2017 Sundance Film Festival. Inspired by the success of this project, Andrew now hopes to have more opportunities in the world of entertainment, such as feature films and television.

Andrew appreciates the time he spent with fellow filmmakers at MUM and has stayed in touch with many of them. “The takeaway from my MUM experience was having the community there, many of whom I have continued to work with over the years making stuff together,” he said.