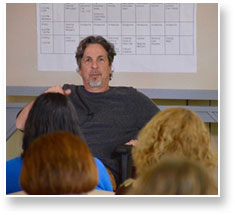 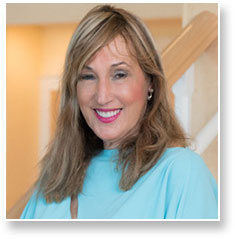 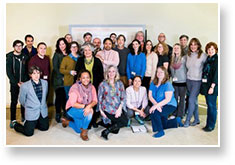 Students and faculty of the David Lynch MFA in Screenwriting Program

Mr. Farrelly was a founding adviser for the David Lynch MFA in Screenwriting, MUM’s low-residency program. He visited campus in February of 2017 and helped launch the program. “We are so fortunate to have had such a talented filmmaker as Peter Farrelly share his expertise with our students,” said Dorothy Rompalske, program creator and director.

During his time on campus, Mr. Farrelly spoke about his films and about how learning the Transcendental Meditation®technique in recent years has affected his work. Students in the program met again with the director this past December during their final residency in Los Angeles.

Together with his brother Bobby, Peter Farrelly is known for writing, directing, and producing quirky comedies such as Dumb & Dumber, Shallow Hal, and Me, Myself & Irene.

Mr. Farrelly co-wrote and directed Green Book. The film is based on a true story of a working-class Italian-American bouncer who was hired as a chauffeur and bodyguard for an African-American classical and jazz pianist in the early 1960s as he gave a concert tour in the Deep South.

Joanna Plafsky is an international film producer, film distributor, and philanthropist. She was co-founder of Nu Image Films (now Millennium Films), which went on to become one of the biggest independent film producers in the world. With the David Lynch Foundation, she produced the inspiring documentary Saving the Disposable Ones about Father Gabriel Mejia.