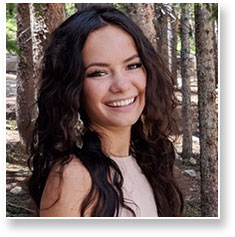 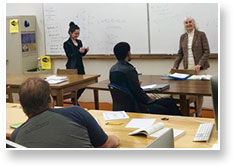 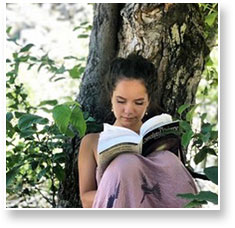 Reading in the woods, her favorite pastime

MIU student Olivia Seidel is one of ten students nationwide who will spend nine weeks this summer at CERN, the world’s largest particle physics laboratory, in Switzerland. She was selected from a thousand applicants, based on her resume and her philosophical approach to science.

Olivia grew up in Connecticut, and became interested in consciousness in middle school. She wanted to understand it through science, so she decided to study neuroscience. But while taking science courses at a community college in Boulder, she saw a video of the famous double-slit experiment, which demonstrates how the act of observation changes the behavior of photons. “The fact that the consciousness of the observer could affect reality made me question everything,” she said.

Olivia switched her focus to physics and soon discovered the unified field theory and the work of John Hagelin. “The idea that consciousness is everything really resonated with me,” she said. When she learned that Dr. Hagelin was the president of MIU, she decided to enroll and study physics.

During her two years at MIU, Olivia has noticed improvements in many aspects of her life as a result of the practice of the Transcendental Meditation® technique. “My focus definitely increased,” she said. “I learned to take breaks and meditate, so when I study I am more effective.”

Olivia is pursuing an individualized major and will graduate in December with a major in physics and a minor in computer science. Her goal is to earn a PhD and become a theoretical physicist. Her current interest is the integration of subjectivity into the scientific method.

“All of our scientific method is based on the theory that you can eliminate subjectivity,” said Olivia. “The separation between objective and subjective isn’t that clear-cut, and there is no such thing as complete objectivity. So we might as well integrate the concept of subjectivity into the way we are doing research. In the future I hope to come up with a measure for subjectivity.”