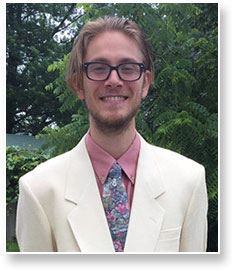 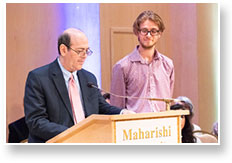 Nicholas Pace came to MUM from New Jersey, where he obtained an associate degree in biomedical science. His plan was to study health and physiology, but after taking a few business classes he realized he wanted to become an entrepreneur.

Nicholas had been exploring meditation when he discovered MUM on Instagram. He became intrigued with Consciousness-BasedSM education and the idea of meditation being incorporated in the curriculum.

He learned the Transcendental Meditation® technique prior to coming to MUM and noticed an immediate positive effect on his high level of anxiety. Once he arrived on campus, the progress accelerated. “I noticed that my growth was exponential being in this environment,” said Nicholas. “I shed a lot of my anxiety.”

To develop his senior capstone project he spent four months working with the Concept to Market Institute, where he learned how to create a business plan. “It was a good experience combining classroom academics with a real-life experience,” he said. “We were given instructions and a structure and we set off to work on our own. I got a simulation of a real-world project.” Nicholas presented his plan for a yoga apparel business that uses recycled fabrics at the Senior Project Honors Competition, where he was a finalist.

“Nick is a wonderful young man with a bright future,” said Cliff Rose, director of the Concept to Market Institute. “Not only was he the top student in his class, he was a strong participant in our daily Concept To Market “creative boardroom sessions”. All of the other students and I benefited from his participation.”

Nicholas also gained some leadership experience while serving on the MUM Student Government. He was in charge of organizing the field day, an outdoor games event concluding the 2017 academic year, which he found a highly rewarding experience.

Nicholas graduated with a BA in management in 2018, receiving the Outstanding Student Award from his department. He is currently enrolled in the sustainable MBA program. He is already working on some entrepreneurial projects, for example a YouTube Channel offering a series of business reviews based on metrics of sustainability and social responsibility. “I can empower the consumers — I like to call them supporters — to understand where their dollar goes and what corporations they are supporting,” he said.