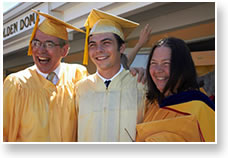 Nathaniel Alexander at his MUM graduation with Professor Gerry Geer and with his mother, Professor Vicki Herriott 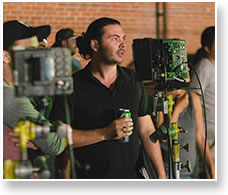 Nathaniel on the set of the Mountain Dew commercial

A scene from Nathaniel’s commercial

Nathaniel Alexander recently graduated with an MFA degree from the University of Southern California School of Cinematic Arts, the oldest and one of the most prestigious film schools in the U.S. He is now launching his own production company, called 200 Percent, to offer music videos, unconventional advertising, and other branded content.

Nathaniel grew up in Fairfield and attended Maharishi School. With his teachers’ approval, he submitted his assignments in the form of videos whenever he could. At MUM he majored in media and communications, and in his free time began to do internships and freelance video work for local businesses.

“I was given a lot of freedom to explore my own creativity,” said Nathaniel. “Professors Gurdy Leete and Stuart Tanner were incredibly supportive and encouraging. Professor Leete’s encouragement was hugely instrumental in my eventual decision to make film my full-time career, because I felt supported in that aspect of my creativity.”

Nathaniel also appreciated the practice of the Transcendental Meditation® technique and everyone’s focus on their personal growth. “Because of TM, the professors were very secure in their understanding of who they were. As a result, the feedback and the encouragement they gave weren’t coming from a place of their personal needs.”

The USC School of Cinematic Arts in Los Angeles is very closely connected to Hollywood studios and experts, so Nathaniel had the chance to experience how the film industry operates. Due to the MFA program’s interdisciplinary approach to filmmaking, he was also able to create short film projects, working on every detail of the development including script writing, editing, production design, and budgeting.

In his third year, Nathaniel won a $50,000 contest, sponsored by PepsiCo, to write and direct a commercial for one of their products: Mountain Dew. The process of working with a brand made him realize he enjoyed working creatively on a story that not only functioned as a narrative but as a vehicle for a product. Nathaniel’s long-term vision is to write and direct television shows, movies, documentaries, and interactive media.