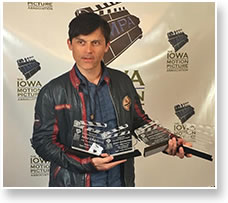 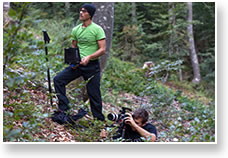 Directing on the set in Slovenia 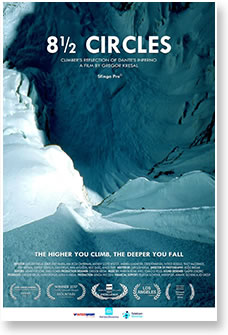 The poster for 8 ½ Circles

A short film by Gregor Kresal, a graduate of the David Lynch Graduate School of Cinematic Arts, won four awards in April at the Iowa Motion Picture Association’s annual awards ceremony, including the top award for cinematography and three Awards of Achievement for editing, soundtrack, and long-form live-action entertainment.

“The practice of Transcendental Meditation has been very helpful in discovering and reconnecting with my personal story,” Gregor said. “It uncovered many suppressed feelings I had not dealt with because of the trauma I experienced due to losing so many friends to mountaineering accidents.” He also said the David Lynch program played an important part in the success of 8 ½ Circles by connecting him with a great crew to work with.

The film was shot in Fairfield, Iowa, the mountains of Slovenia, and on the high-altitude glaciers around Europe’s highest mountain — Mt. Blanc, in France. The film uses actors from around Fairfield and from Slovenia, as well as Joey Maida from California in the lead male role.

Gregor has also collected numerous other awards, including the first prize at the Alpi Giulie Cinema in Trieste, Italy, the Seven Summits Award at the Mountain Films Awards, the Award of Excellence at the Headline International Film Festival, and Platinum Winner at the International Independent Film Awards. Gregor is currently in a pre-production phase of turning his 32-minute film into a full-length feature.