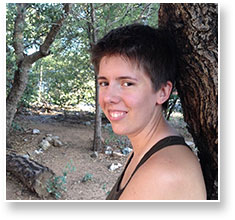 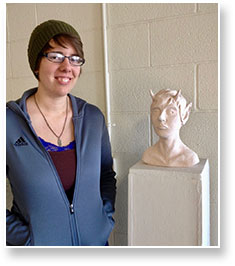 With a self-portrait she made in a sculpture class 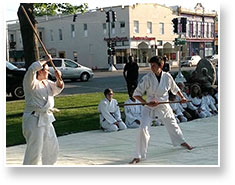 During an Aikido demonstration in downtown Fairfield

When MUM student Megann Kammerman saw a video of Jim Carrey’s MUM commencement speech, she immediately became intrigued by the university’s non-conventional approach to education. But she waited until her younger sister graduated from high school and, in August 2015, they both enrolled at MUM.

Prior to coming to MUM, Megann had pursued various types of art, including making gemstone bracelets and drawing portraits, so she naturally chose art as her major. At the same time, she was an avid reader of fantasy and had always wanted to write. Eventually she realized that she could be more creative through telling stories and switched her major to creative writing. “I love writing fiction because I can do anything, especially with fantasy,” she said. “There are no limits.”

Over the past two years she has written numerous short stories and flash fiction and began working on the draft of a novel in a recent novel-writing class. Megann also enjoys editing and helping fellow students improve their writing at the MUM Writing Center.

As a writer who is constantly thinking about characters and plot twists, Megann welcomes the interruption of the daily practice of the Transcendental Meditation® technique, which allows her to unwind.

“Consciousness-Based education puts the student first,” Megann said. “Rather than putting emphasis on test scores or memorization skills, it works to develop our understanding and knowledge and creativity. It gives us the tools (TM is one of them) to build a life that allows us to follow our dreams.”

When she arrived at MUM, Megann also joined MUM’s Aikido Club, where she is now the president. She enjoys the harmonious, non-violent practice of the martial art and attends practice four times a week. Her dedication has resulted in rapid progress, and she recently passed the fifth level of testing at a seminar in Missouri. She is now only one more level away from beginning training for a black belt test.