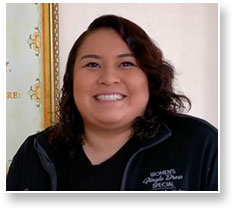 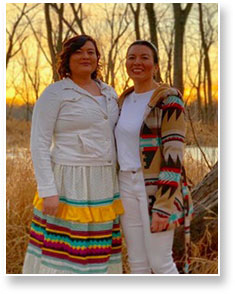 With her mother and fellow MIU student Winona Tahdooahnippah 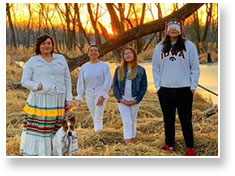 With her mother and siblings Ioleta and Lincoln Kingbird

Lilia Kingbird is a descendant of the Red Lake Band of Ojibwe Native Americans of Minnesota and the great Comanche Nation of Oklahoma. Although she attended public school, she grew up around the Circle of Nations boarding school for tribal children in Wahpeton, North Dakota, where her parents worked as teachers.

In 2017 she saw a video of Jim Carrey’s MIU commencement speech and looked up the university at her mother’s encouragement. Although she was nervous about the idea of going to college, she liked the curriculum and enrolled in January 2018. Her mother also enrolled at the same time, starting the online MBA Program.

“I had no excuses at that point; there was no reason for me not to go to school,” she said. “The block system, the vegetarian meals, meditation, those were all the things I really needed in my life at the time because I was struggling and didn’t know where to go.”

Lilia found the Transcendental Meditation® technique helpful for dealing with previous trauma and mental health issues. “TM helped a lot with my anxiety,” she said.

After spending a year on campus, Lilia is now taking her classes online while living in Wisconsin near a Chippewa tribal community. Last fall she won an essay contest sponsored by MIU ChangeMakers answering the question: How would you apply your unique gifts to transform the world?

Lilia described that, from a young age, she helped her father teach singing and developed a talent for telling stories and entertaining. But growing up around unstable families, she had witnessed and experienced addiction. Seeing children on tribal lands and reservations not having access to the same care and support as other communities receive, she became inspired to help these youth. She began speaking publicly about her challenges and how she overcame them. At MIU, she is pursuing an individualized major and plans to get a graduate degree in social work and drug and alcohol counseling.