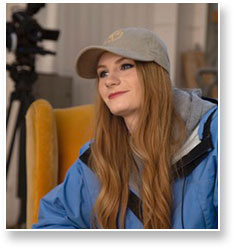 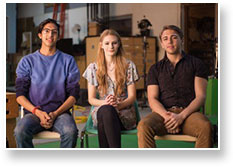 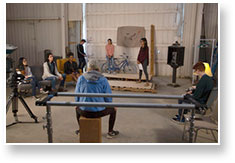 Directing the cast of The Playhouse

A scene from The Playhouse

Lauren LeBritton has accomplished a feat few other undergraduate students have: she has written, directed, and co-edited a 30-minute film that was nominated for the Iowa Motion Picture Association’s 2019 awards.

Lauren created The Playhouse during a four-month module with a crew of four fellow film students and a cast of about 15 MUM and Maharishi School students and alumni. The light-hearted comedy is about a group of high school thespians fighting to keep their performance space from being sold to a villainous buyer.

Lauren came to MUM from New Hampshire with her best friend, Haley Spitzfaden. Haley’s two older sisters both attended MUM, so Lauren had known about the university growing up. She wanted a non-traditional education and was drawn to the health benefits of the Transcendental Meditation® technique.

She had suffered from anxiety and insomnia, which both gradually improved after she learned the TM® technique. “I didn’t even realize how bad it was until I came here,” she said. “TM has definitely helped my mental state.”

Lauren began songwriting as a child and sang in numerous choirs and a cappella groups. She has also been interested in photography, so she decided to major in media and communications. In addition to making a short film, she has taken classes in music production.

“Before I came here, I wanted to make music and also do film work,” said Lauren. “I didn’t realize that I would be graduating with all this knowledge to do it on my own. Everything is so accessible at MUM because it’s smaller, more centralized. You have time with the teachers and the equipment, unlike in other schools with huge programs.”

Lauren is currently working on recording her first album as part of her senior project as well as producing her first music video. She will be publishing her work via online streaming platforms such as Spotify and YouTube.