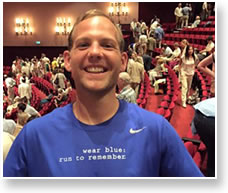 Student Kyle Amsberry at the 2016 ELI Summit in Holland

Sgt. Kyle Amsberry with his brother, Sgt. Nicholas Amsberry, in Iraq in 2007 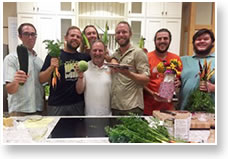 With fellow students and farm managers, Daniel Harvey and Kristofor Johnson, on the Great Taste radio show with Steve Boss 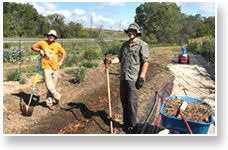 On the MUM farm with farm manager Kristofor Johnson

MUM student Kyle Amsberry grew up in Mesa, Arizona, and joined the U.S. Army at age 18. He served for five years, including tours in Iraq and Afghanistan. After leaving the Army, Kyle attended college for a while, then bounced around from job to job, working as a bartender for several years. But his life didn’t have a direction, and he didn’t have a healthy way to cope with post traumatic stress disorder.

In the winter of 2015 he heard about the Transcendental Meditation® program and, with the help of a David Lynch Foundation scholarship for veterans, he learned the TM®technique. He was so amazed by the transformation he experienced that he wanted to be involved with teaching the TM technique to veterans.

“I experienced calmness and silence,” said Kyle. “The chatter wasn’t there anymore; I wasn’t on edge that much. I found something and I wanted to help other people. I had a direction.”

Kyle wasted no time. He joined Enlightened Leadership International (ELI) and six months later attended an ELI summit in Holland. There he learned about MUM and decided to apply. After attending a Visitor’s Weekend where he met Dr. Thimmaiah, director of the Regenerative Organic Agriculture Certificate Program, Kyle decided to join the new program.

During his first class he had to write a business plan, and he came up with the idea for an organic farm and TM retreat for veterans. “I realized I can bring farming and TM together,” he said. “They are both therapeutic, and integrating the two can give veterans something to do.”

Kyle will soon be concluding the 10-month certificate program with an internship in New Zealand. Then he will continue studying at MUM to earn his BA in regenerative organic agriculture. He is still considering ways to facilitate programs that teach veterans the TM technique and organic agriculture at the same time. He also hopes to promote MUM among veterans so that they can better integrate the TM technique in their lives while also earning a degree.