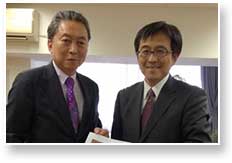 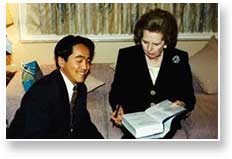 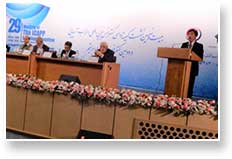 Giving a talk at the 2018 ICAPP in Tehran

With son Seiji and wife Tokomo

MUM alumnus Kenichi Suzuki serves as the assistant general manager of the Communication Department of the Democratic Party for the People in Japan. He recently published an article in The Diplomat, an international current affairs magazine for the Asia-Pacific region. His article highlights how South Korea’s National Security Advisor played a key role in the recent North Korea summits.

Kenichi developed an interest in politics as a teenager, and pursued it with the conviction that politics is a means to creating an ideal government that positively affects people’s lives in the direction of improved health, happiness, and prosperity. He came to MIU to study government in the light of Maharishi’s knowledge and to follow a healthy lifestyle, including the practice of the Transcendental Meditation®technique. He graduated with a BA in government in 1994.

During his time at MIU he interned with Iowa’s US Senator Chuck Grassley and former British Prime Minister Margaret Thatcher. In 1996 he obtained an MA in sociology from the University of Essex.

For more than 20 years he has been devoted to establishing a two-party democratic political system in Japan and has worked for numerous political leaders, including former Prime Minister Yukio Hatoyama. Kenichi says he strives to follow Maharishi’s advice and maintain “purity of heart” and use his career as a vehicle of service to follow his dharma.

In recent years, he has been involved with the International Conference of Asian Political Parties (ICAPP), which Kenichi describes as “Asia’s largest political forum, and a place where political leaders can speak freely about issues toward its ultimate goal of an Asian community.”

Kenichi appreciates the network of people he developed through MUM and how they helped him in his career. He is also grateful for how the TM® technique supports his everyday life. “TM helps to bring me confidence in my mind,” he said. “This, in turn, enables me to keep trying new things and yet keeps me calm in the midst of such activity. This is because my consciousness can experience the unified field of natural law through TM.”

Kenichi’s wife Tomoko, an MUM alumna with a BA in psychology, helps him in his political work, and their 12-year-old son Seiji enjoys discussing politics.