Jesse Holubeck—Living a Life of Purpose and Service 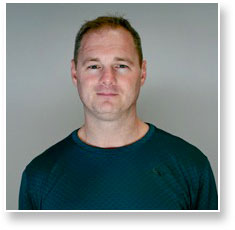 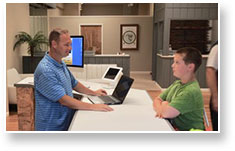 Behind the counter at work 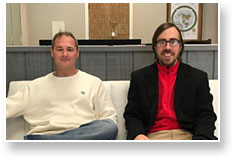 With Matthew Lindberg-Work at the shop

Jesse Holubeck was running a successful house-painting business in St. Louis, Missouri, when in 2006 he saw Dr. John Hagelin in a movie discussing consciousness. His curiosity led him to discover MUM, and he says he “dropped everything and moved to Fairfield.”

He enrolled at MUM, and a year later he learned the TM®-Sidhi technique. Jesse fell in love with the Yogic Flying® program and soon joined the Invincible America Assembly for a year.

He then returned to St. Louis and started a computer support and repair business. He had been fixing computers for friends and family, so he decided to turn his hobby into a business.

But Jesse realized that he missed living in Fairfield and attending the Golden Domes, so he moved back in 2012. “TM has given me a purpose in life,” he said. “When I am here serving people and follow my heart, things start to go my way and opportunities open up. I am part of a community and I am growing spiritually.”

Jesse has gradually built up his clientele by word of mouth. He recently teamed up with fellow alumnus Matthew Lindberg-Work in order to expand the enterprise. Named 2 Geeks and a Computer, the business offers a variety of services, including fixing corrupted systems, purging viruses, and repairing hardware.

Jesse’s aim is to be mindful of his customer’s needs and adapt his business accordingly. For example, based on his own experience and the public’s growing concerns for safety, he has thoroughly researched the effects of electromagnetic radiation and discovered that Wi-Fi routers emit signals powerful enough to cover the size of a football field. With the help of Matthew, he found an eco Wi-Fi solution that reduces this effect up to 90 percent.