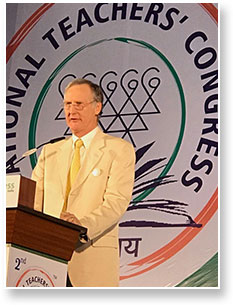 Scott Herriott addressing the audience at the Congress 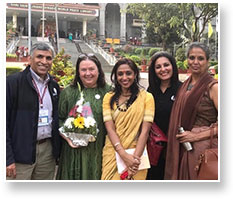 Anil Maheshwari and Vicki Herriott with teachers from MIT-WPU 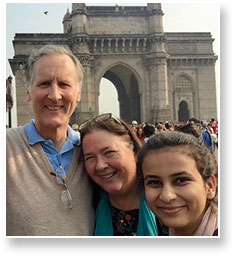 Scott and Vicki Herriott with Kamna Gaur, the young TM instructor from Delhi who helped them teach the Transcendental Meditation technique to the faculty and students at
MIT-WPU

National Teachers’ Congress (NTC) is a convention of higher education teachers from India, and teachers of Indian origin living abroad, with the mission of facilitating the exchange and dissemination of creative and visionary ideas and best practices through interaction with peers and thought leaders from all walks of life.

The MUM faculty were invited to give plenary addresses, along with the Dalai Lama and about 30 other eminent educators and political leaders. Over 2,000 teachers took part in the Congress, mostly from India but also including hundreds of visitors from a dozen countries.

In his address to the Congress, Dr. Maheshwari spoke about the ultimate goal of education: to help students prepare to live a blissful life. Dr. Herriott gave a presentation about the fourth state of consciousness and its role in education, showing references to this state of consciousness in the Mandukya Upanishad and the Bhagavad-Gita. He cited research showing that 8,000 students practicing the advanced TM-Sidhi®program together would radiate an influence that would help create peace in the world. “World peace is a mere byproduct of a properly founded system of education,” Professor Herriott said.

This private university was founded by Dr. Vishwanath Karad in 1983 and currently has 65,000 students. MIT-WPU strongly supports MUM’s Consciousness-BasedSM education and has resolved to build a meditation hall for 4,000 students. During the Congress Dr. Karad met privately with the MUM faculty.