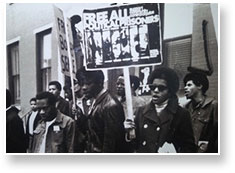 Ethel (front right) participating in a 1970 protest against political imprisonment 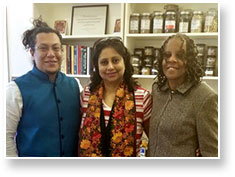 MIU student Ethel Paris introduced and helped organize the African American Culture Series, the first African American celebration at MIU. Held during Black History Month in February, the series included presentations about the influence of African American music in America, famous black scientists and inventors, and the black resistance movement, where Ethel gave a talk about her time in the Black Panther Party in the 1960s.

Ethel joined the Black Panther Party at age 18 in Oakland, California, looking for a way to be part of a community and feel empowered about her heritage. But she soon became disillusioned with the leadership and left the party.

She wanted to change her life and decided to become vegetarian. She soon began practicing yoga, and eventually became a yoga teacher. She has taught free yoga classes in community centers and recreational centers for over 30 years in her hometown of Philadelphia, and later became a massage therapist. Ethel says she has been on a spiritual path for 45 years.

A few years ago, she heard about MIU from an alumna friend. Ethel never attended college, so she was concerned about keeping up. But the block system of one course at a time and her desire to learn Maharishi AyurVedaSM made her eager to enroll.

When Ethel arrived on campus, she felt at ease right away. “I could feel a different energy; it was very life-supporting and things just started happening,” she said. She learned the Transcendental Meditation® and TM-Sidhi® programs, and experienced even more support of nature as well as emotional and mental stability.

“What I had experienced before as a yogi was turning myself off from the world totally,” Ethel said. “That was a different path. With TM, I can be in the world and also be able to deal with it.”

Ethel is graduating this summer with a BA in Ayurveda Wellness and Integrative Health. She wants to return to Philadelphia and work as an Ayurveda consultant.