Esther Fontaine—Getting a Masters Degree on the Road 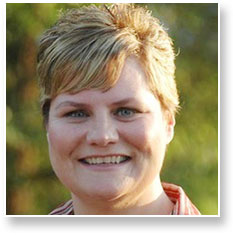 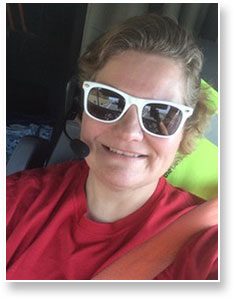 Behind the wheel of her semi truck, which she drove for a year across the country 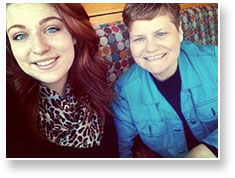 With her daughter Jenn, who discovered MUM

MUM student Esther Fontaine is a professional driver taking MUM’s online MA in Maharishi Vedic ScienceSM program. While driving a truck across the country for a year, Esther found a way to keep up with her classwork: she listened to the lectures on the road, took notes during her breaks, and did her homework at the end of her ten-hour shifts.

Esther has been a commercial driver for 34 years, driving buses, taxis, limousines, and trucks. She now lives in Illinois and drives locally while finishing her degree. Originally she trained to become a police officer and also earned a dual degree in criminal justice and sociology.

Esther has always been an avid reader. Growing up in a troubled home, she escaped to reading. At the age of seven, she became interested in God and attended various churches and Bible camps in search of answers. As an adult, she studied every religion, including Buddhism, Islam, and Bahá’i.

In 2012 Esther experienced difficulty coping with family trauma and loss, so she began searching for answers again, this time through personal development seminars and books. She attended Landmark Forum programs, which catapulted her growth. “I was looking for something that would challenge me on a level that I have never been challenged on before,” she said.

In 2016 Esther’s daughter discovered MUM while visiting Iowa, and Esther knew she had found what she was looking for. She learned the Transcendental Meditation® technique and enrolled at MUM the same year. She says she has become more peaceful and content, in spite of life’s challenges: “Transcendental Meditation has changed my life.”

Esther was excited to discover all the scientific studies on the TM program. “The logical correlation of a spiritual reality that manifested through a scientific avenue was what I’ve looked for my whole life,” she said. She enjoys sharing her experiences of the TM® technique and what she is learning in class with her friends.

In the future, she wants to write and speak about her journey and help women overcome domestic violence. “I want to create a legacy of change, where people know that it doesn’t matter where you come from, it matters where you end up.”