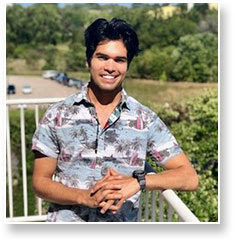 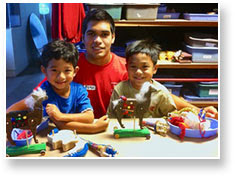 Working at the Eli Whitney Museum as a teenager

With fellow students at MUM

MUM student Enrique Baker has been on track to become an entrepreneur since age 13. He apprenticed as a camp counselor at the Eli Whitney Museum in New Haven, Connecticut, and later in high school he worked as the manager of the school store. While attending college in Connecticut, he completed several internships, held different jobs, and joined organizations.

But in 2014 Enrique was diagnosed with bipolar disorder, fell into a depression, gained weight, and wasn’t able to continue college. His doctors told him to rethink his dreams and his future. Fortunately, Enrique’s father came across Dr. Norman E. Rosenthal’s book Transcendence and, after listening to the audiobook, Enrique learned the Transcendental Meditation® technique.

“Practicing TM has helped me greatly in managing my mental health condition,” said Enrique. He was able to cut down on his medications, improved his lifestyle, lost weight, and returned to school. Inspired by his experience with the TM® technique and by the stories of MUM he heard from his TM instructor Richard Dalby, he enrolled at MUM in February 2019.

“What I like about MUM is that there is a mindset for progress and evolution,” he said. Enrique is pursuing an individualized major focusing on entrepreneurship. He is exploring a variety of disciplines, including Maharishi Vedic ScienceSM, physiology and health, and media, so when the time comes he can assemble a team of specialists for his own business.

He is also honing his entrepreneurial skills by being involved with MUM Student Government. As president of the Food Committee, he is dedicated to improving service through changes such as upgrading food labeling and having spices available in the dining hall. “I wanted to devote myself to something,” he said. “You have to be part of a community. I learned that by being part of a support group in Connecticut for my depression.”

Enrique also volunteered to be a student organizer and host during the last ChangeMakers event in June, where he interviewed one of the main speakers, Kathryn Frazier. Enrique likes to encourage students to be part of student organizations so that they can cultivate community and practice communication and leadership skills.