Your gift will be doubled by a matching grant! Details below.

MIU was just blessed with a remarkable gift: an opportunity to build our permanent endowment.

A magnanimous donor offered to match, dollar-for-dollar, donations totaling $1 million (see details below). And thanks to the support of our generous donors, that matching challenge has been achieved—resulting in a $2 million boost to our endowment!

This Matching Challenge has just been extended by another $½ million. If we can fulfill this match, it will bring another $1 million to our crucial endowment reserves.

Every private college and university in America relies on an endowment as a permanent bedrock that supports their critical operations—and provides precious fuel for expansion.

During the great recession of 2008, hundreds of our ComPro graduates could not find jobs for a period of 6-9 months, causing a major shortfall in MIU’s cash flow. While these ComPro graduates were ultimately placed in high-paying jobs, substantial cash reserves were needed to weather that storm. The exact situation confronts us today.

An endowment fulfills this critical need. With the donor’s and trustees’ permission, the University can borrow temporarily against its Endowment to survive the coronavirus pandemic—as well as any future catastrophe.

A golden opportunity for our golden anniversary!

It is thrilling, as we gear up to celebrate MIU’s Golden Anniversary in 2021, that we are blessed with this golden opportunity to build our endowment by $3 million by June 30. And we are already two-thirds of the way there! This is a GREAT milestone—and a giant step toward long-term financial stability.

$500,000 raised now will complete this $3 million endowment giant step—so we can easily weather this current pandemic—and all future crises.

Having the financial reserves to safely weather the coronavirus storm takes special leadership: It takes all of us! With ComPro hiring at a temporary standstill, now is the time to fortify and protect ourselves—to secure our present and our future.

It takes all of us!

With ComPro hiring at a standstill, now is the time to fortify and protect ourselves—to secure our present and our future.

Bequests and legacy gifts are always deeply appreciated, but MIU’s need is now. And fortunately, with our generous one-for-one matching gift, it’s an easy lift.

Let us not leave this to someone else. We have to do it. Each of us.

Let us be counted among those who secured Maharishi’s precious University—now, and for all times.

With exciting new academic programs, students from 88 countries this year, new partnerships in other countries, and a campus being transformed through the generosity of our donors, the stage is set for MIU to transition from dependence on its human endowment to the security of a traditional cash/asset endowment — the kind of endowment that sustains the majority of colleges and universities in America.

The timing couldn’t be better. A visionary donor has offered to match, dollar for dollar, donations up to $1 million to establish a permanent endowment for MIU.

We have a six-month window starting January 1, 2020, to raise $1 million in matching funds.

As we prepare to celebrate our golden anniversary in 2021, we have a golden opportunity to create a $2 million endowment for MIU by June 30, 2020 — a springboard to long-term financial stability.

Please join us in this vital next step to help secure MIU’s next fifty years and beyond.

To see the 2020 endowment letter click on the image below. 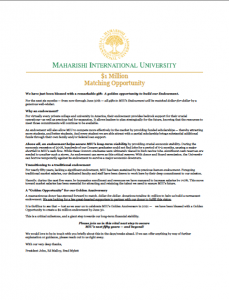 Giving by credit card or PayPal:

Other Ways of Giving to Support the Endowment:

You can donate shares of stock to MIU

To learn how to do that, see our Stock Gifts page.

Make a check payable to MIU and mail to:

Please include the word “Endowment” in the check memo or attached note.

Send a wire from your bank  to:

Please Include your name, the word “donation” and the sentence “Gift to the Endowment”