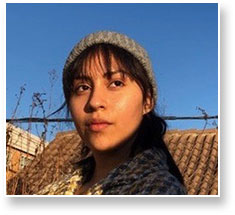 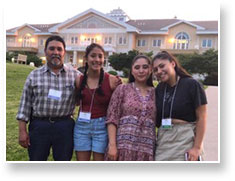 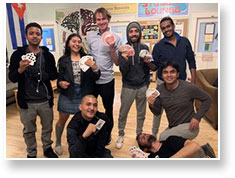 Learning to play games with the English Buddy Club

Elizavet Carranza was born in Mexico and grew up in a small town on the Colorado plains. In her senior year of high school she stumbled upon MIU on the Internet. She came to a Visitors Weekend, and she was so excited about attending that she brought her father and two sisters to a subsequent Visitors Weekend.

“It was nothing I ever imagined,” said Elizavet. “I liked the organic vegetarian food, Consciousness-Based education, one course per block, meditation. I thought this school knew what education was about.”

Elizavet planned on majoring in business, but an English composition class sparked a desire to take up writing. She had always been interested in writing and communication but never imagined life as an author. Now she is pursuing a major in creative and professional writing and a minor in cinematic arts and new media.

“Transcendental Meditation is the reason why I feel so confident in my writing now,” she said. “Before I came here, I based my decisions on surface things. But through practicing TM, I’ve felt more and more myself, and writing just kept coming back to me.”

Elizavet has always enjoyed participating in her community. In high school she was the Colorado state officer of public relations for the youth organization Family, Career and Community Leaders of America. When she arrived at MIU last August, she immediately joined the English Buddy Club and later became president. Since she joined, the club’s attendance has increased ten-fold. Elizavet also likes doing public relations, so her next goal is to join MIU Student Government as communications coordinator. In addition, she has been hosting events during Visitors Weekends.

Elizavet has no shortage of subjects to write about, including stories of her upbringing and strong family connections. She enjoys exploring various genres and feeling inspired by her classes. “Everything is in your grasp as long as you have the intention,” she said