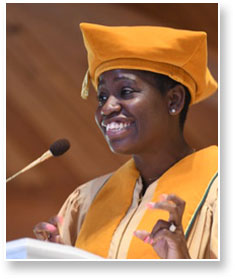 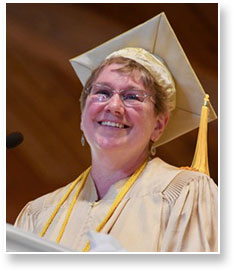 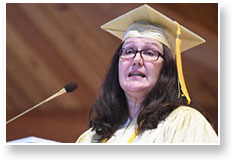 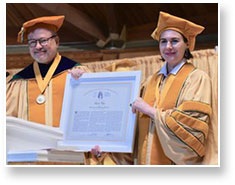 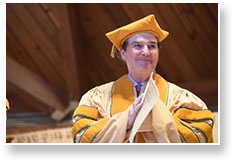 606 students graduated from 53 countries during MUM’s 2019 commencement ceremony on June 22, the largest class in university history. These included 389 computer science master’s students, and 50 students from the Maharishi Institute in Johannesburg. The largest number of graduates came from Nepal (126), followed by the US (102) and Ethiopia (59).

Chicago educator Nakisha Hobbs gave the commencement address. Ms. Hobbs cofounded and directs the Village Leadership Academy in Chicago, a kindergarten through 8th-grade school with 700 students, whose focus is to transform urban youth into global leaders and which incorporates the Transcendental Meditation® program. (Watch a video about the Village Leadership Academy, made by 2019 graduate Shannon Ryan here).

Ms. Hobbs is a fourth-generation educator. She holds an undergraduate degree from the University of Illinois at Chicago and a master’s in early childhood education from Roosevelt University.

Ms. Hobbs is associate director of the Office of Early Childhood Development in the Illinois Department of Human Services, where she oversees a $1.3 billion budget. She directs state policy to ensure equitable access to high quality early childhood experiences for Illinois children.

In her speech, Ms. Hobbs described her school as setting high academic expectations, offering small classrooms and individual support, and including a social justice curriculum with an annual trip to a foreign country.

“Nothing in life is ever happening to you; everything in life is always happening for you,” said Ms. Hobbs, offering some of the lessons she learned in life. Based on her experience, she advised graduates to look at adversities as opportunities that are part of life’s adventure. She also encouraged students to stay true to the desires in their hearts that will guide them towards their destinies.

During the ceremony, MUM President John Hagelin presented Ms. Hobbs with an honorary doctoral degree in education for her lifelong service and groundbreaking contribution to the field of education.

Honorary doctoral degrees were also awarded to Chris Wege, whose family foundation has contributed over $1.9 million to the university, and MUM Trustee and 2003 alumna Laura Wege, who has helped facilitate contributions of the Wege Foundation.

During the Graduation Awards Ceremony the night before, Deepak Baskota, a former member of Parliament and Minister for Home Affairs in Nepal, also received an honorary doctorate for his work leading his country’s Transcendental Meditation organization.

Thursday evening, MUM also presented Navin Doshi, renowned aerospace engineer, philanthropist, author, and Vedic scholar with an honorary doctorate for being a leading proponent of India’s Vedic heritage and its role in the modern world.

Watch the video of the commencement ceremony here.