MIU alumnus Edgard Camacho studied journalism in Venezuela and came to the US seeking political asylum in 2004. After spending eight years in Miami as an image consultant and wardrobe specialist in designer fashion, he decided to follow his dream and study art. 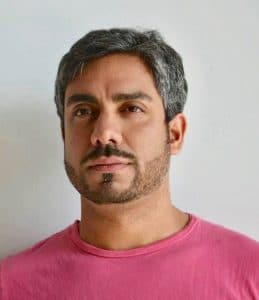 He saw MIU on Facebook and welcomed the idea of personal transformation, a drug-free campus, and a new environment where he could focus on his art. Discovering that nationally known artist Jim Shrosbree headed the art department finalized his decision.

With art faculty and fellow students at his BFA exhibit

Since he graduated in 2015, Edgard has been living in Des Moines, Iowa, where he currently works at Steven Vail Fine Arts, a gallery that represents international artists like himself. He has participated in several group shows in Iowa, including at the Cedar Rapids Museum of Art, and solo exhibits at the University of Iowa Hospitals and Iowa State University. 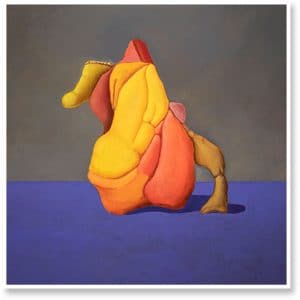 The daily practice of the Transcendental Meditation® technique is essential for his work, as it helps him stay attentive. “TM makes you more centered and focused on keeping the creativity flowing instead of the ego,” he said.

Edgard has made a lot of connections in the Iowa art scene since he moved here and appreciates the recognition and opportunities he has received, which he says reflect well on the quality of teaching at MIU’s art department. “Being at MIU sharpened my work because of the attention on the self,” he said. “The positive criticism given at MIU helps artists prepare for the criticism out in the world. I have never seen that in any other school.”

In the near future Edgard plans to apply to the MFA program at the University of Iowa.