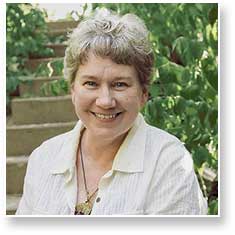 Discussing the revision process in a composition class 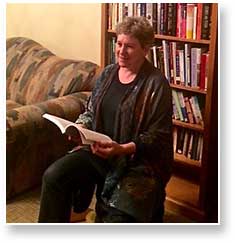 Dylene reading her novel, Moving Home, at an MUM event

She has published four novels, co-authored several non-fiction books, and written or edited over 50 screenplays; now she is studying creative and professional writing at MUM. Why? Although Dylene Cymraes has been a professional writer for over 20 years, she never had the time to attend college while raising four children and traveling the world as a military spouse.

Dylene learned the Transcendental Meditation® technique in 2014 and came to a Visitors Weekend to accompany a friend. Two years later she and her husband moved to Fairfield from Maryland so she could finally fulfill her lifelong dream of being a student.

Since she taught herself the art of writing, Dylene missed out on the opportunity to workshop and refine her work in a classroom. Now she really enjoys being able to receive feedback from her teachers and fellow students.

Dylene was concerned about returning to school after a 30-year hiatus in formal education. “I was worried whether I could keep up with the course load,” she said, “but my TM practice has been a huge help. My blood pressure is down and I am healthier than I have ever been.”

Participating in the diverse demographics of the MUM campus is another advantage Dylene appreciates. “I love being in school with younger people. I love keeping my mind challenged and being accepted.” Dylene contributes to the MUM community by serving as a residential advisor in her dorm and being on call at the MUM Writing Center. In addition, she is fiction editor of the new online literary journal Metafore, founded by MUM students.

“Dylene is a teacher’s dream,” said Professor James Fairchild. “Not only is she the most mature writing student I’ve had at MUM, but she’s a model student in every way.”

Dylene has made a living as a writer but, more importantly, she writes for the love of it. Once she graduates, she hopes to teach workshops and share her passion with others. She is currently working on a new novel, which she will be drafting in an upcoming two-month novel writing class.