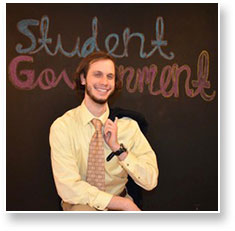 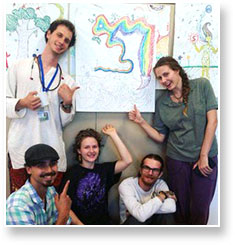 With classmates in a biodynamic agriculture class 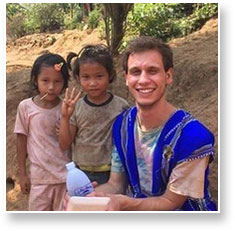 Working in the Mae La Oon refugee camp in Thailand 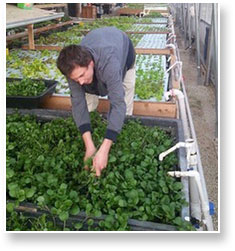 Harvesting watercress at an aquaponic facility during an internship with PortFish, Ltd in Port Washington, Wisconsin

Student Dylan Hanneman grew up in the small town of Cedarburg, Wisconsin. Although not from a family of farmers, Dylan spent several years studying organic agriculture and sustainable building techniques through internships around the country. Driven by a desire for independence, he wanted to learn how to feed and house himself.

Then he saw an ad for MUM’s Regenerative Organic Agriculture Program and decided to get a degree. Dylan wants to graduate with a double major in regenerative organic agriculture and sustainable living. His mission to become self-sufficient has now become a calling to teach others the variety of farming and building techniques he has been learning.

“Simple methods of agriculture could be taught to a wide range of people all over the world so that they could have food and shelter,” Dylan said. “Building up the topsoil and having more reserves of clean water are also a focus of mine.”

Dylan says he likes MUM because he doesn’t feel like he is in America. The presence of all the international students makes him feel he is all over the world. He thinks the TM® technique is the easiest and most effective meditation technique and, within a year of enrolling at MUM, he learned the TM-Sidhi®program.

“I get more energy from practicing TM,” he said. “It helps me focus when I go into activity and it helps me get rid of stress; that’s the biggest benefit of TM.”

Last May Dylan was asked to join MUM Student Government, and he took the opportunity to serve as vice president. In December, he stepped up to become president when the position became vacant. His desire is to help students accomplish their goals and improve their experience. He also enjoys listening to his peers with caring and empathy. In his free time, Dylan likes playing music, acting, and writing.