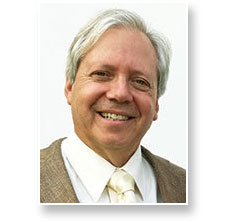 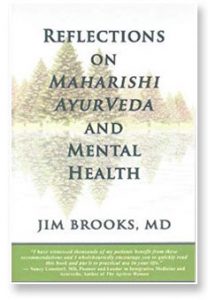 The cover of Reflections on Maharishi AyurVeda and Mental Health 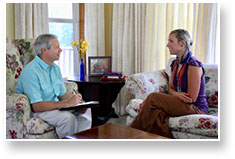 Dr Brooks with a patient

Jim Brooks, MD, is an adjunct assistant professor of physiology and health at MIU, whose paper on Maharishi AyurVedaSM and mental health recently appeared in the Journal of Maharishi Vedic Research Institute. His book, Reflections on Maharishi AyurVeda and Mental Health, was published by MIU Press in 2016.

Dr. Brooks has studied Maharishi AyurVeda since 1983 and trained with some of the most renowned Vaidyas from India. He was founding director of the Maharishi AyurVeda Health CentersSM in Los Angeles and Washington, DC, and published the first research paper on the use of Transcendental Meditation® for post-traumatic stress disorder.

Dr. Books is also a teacher of the TM® technique and has incorporated the practice of the TM technique and Maharishi AyurVeda in his private psychiatry practice. He has witnessed dramatic improvements in the areas of depression, anxiety, addiction, and schizophrenia with his patients and became passionate about educating people, especially mental health professionals, about the contributions of Maharishi AyurVeda to mental health.

“The approach to mental health in the West is to treat symptoms,” he said. “There is a lot of evidence that TM and other modalities can help prevent mental illness and addictions. The potential cost savings with Maharishi AyurVeda are staggering.” Dr. Brooks hopes that his book and paper can contribute to the understanding and adoption of Maharishi’s technologies in the prevention and treatment of mental disorders.

“The TM technique and other supportive modalities help people experience bliss consciousness,” Dr. Brooks said. “That is the most effective treatment for depression. Bliss is the best antidote to sadness; it melts away depression.”

Dr. Brooks is also a practitioner of Chinese medicine and classical five-element acupuncture. In addition, he and his wife Linda facilitate couples workshops in the US and South Africa.