Dick DeAngelis–Documenting the History of Fairfield 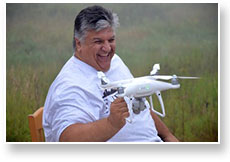 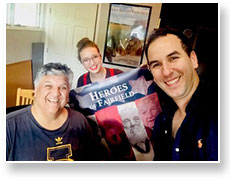 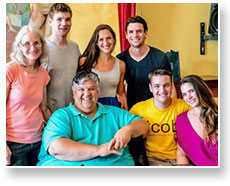 Dick and Karen DeAngelis with their five children 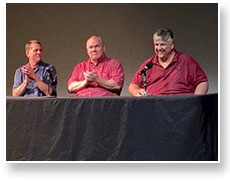 Dick DeAngelis is well known in Fairfield and the MUM community. He was director of the highly popular All Things Italian Street Festival for ten years, and his latest project is an eight-part documentary titled The Fairfield History Series.

Dick came to MIU in 1975 from Northeastern University in Boston, where he had learned the Transcendental Meditation®technique three months earlier. He was so fascinated with the idea of a school where everyone meditated that he transferred right away.

He graduated with a BA in business in 1979 and worked as a stockbroker, then as senior vice president at Telegroup and International Trading Group, training over 500 people in sales and marketing. He also started a few of his own ventures and in his free time hosted a radio show telling bedtime stories. Together with his wife Karen, who received a BS in biology from MIU in 1979, they raised five children who all attended Maharishi School.

A couple of years ago Dick became inspired to tell the story of MUM and Fairfield in a documentary series. “I feel very fortunate because I had my MIU education and was able to raise my kids in this town and I wanted to do something to give back,” he said. Although he had never produced or directed a documentary before, he didn’t hesitate to get started.

His experience with Consciousness-BasedSM education made him confident that he could connect any knowledge to his own consciousness. “My education at MIU has always allowed me to be comfortable with any field of knowledge,” said Dick.

Using his networking skills and familiarity with the local community he teamed up with faculty and students at the Media and Communications department, involved the Fairfield Media Center, and soon began production. Dick received a lot of support in the form of over 100 volunteers as well as grants and donations. He has completed two of the films and plans to finish the remaining six installments within five years. His goal is to highlight the connections among people who live and have lived in the area.

Watch a trailer for the series here.