David Samuel—Growing Through Supporting Others 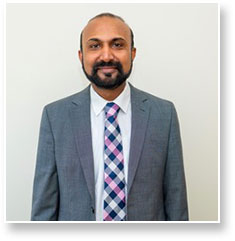 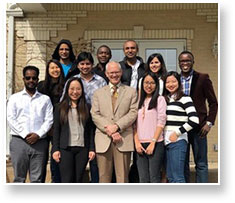 With professor William Graff and classmates in an auditing class 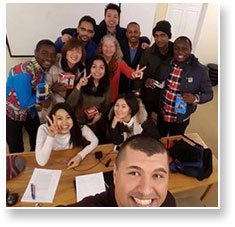 At a Christmas celebration with classmates and program administrator Karen Slowick

David Samuel came to MIU from India, where he began his career as a data analyst. He developed a passion for finance and accounting and has worked as a financial analyst in multiple sectors, including manufacturing, information technology, and the service industry.

He had always wanted to pursue an MBA in a different country, but his many commitments intervened. Then, after working for over 15 years, he finally made the decision. He heard about MIU from a friend who visited campus and decided to enroll in the Accounting MBA program in 2017.

He liked the friendly campus and the smoke- and alcohol-free environment. But he was most impressed with the structure of the program: eight months of classes followed by an 18-month practicum with a US company.

David had concerns that meditation would take a lot of effort, but when he learned the Transcendental Meditation® technique he realized how easy the practice was. He said he has been learning to recognize and understand his inner value as a result of his practice. “TM helps me to know what I should be doing and move forward,” he said. “Whatever I do, it helps me do it better.”

While still attending classes, his professors placed him in an internship position with Fairfield’s Ideal Energy. Soon after he started there, the company decided to retain him for his practicum and obtain a work visa for him. David is now working as operations support manager preparing budgets and forecasts, analyzing financial performance, and helping the leadership with strategic growth.

“Launching my career in the US by working for a small company where I can add a lot of value is a good starting point,” he said. “I want to grow where I can help.”

David graduated during the 2020 commencement and received the Outstanding Student Award in the MBA Accounting track.