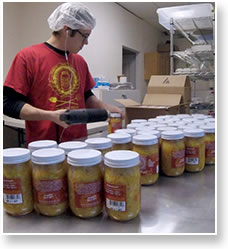 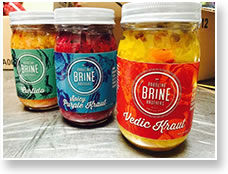 Daniel Gorman is co-founder of Bubbling Brine Brothers, a sauerkraut business he started while a student at MUM. In fours years he went from cutting vegetables by hand in his basement to renting and renovating a commercial kitchen and selling his products to 12 grocery stores.

Daniel came to MUM from northeastern Missouri, inspired by his mother. They both have practiced yoga, and Daniel became interested in Eastern philosophy in high school. When he began studying soil biology at MUM, he became fascinated with the role of microbes. He wanted to apply what he learned about microbiology and apply it to food fermentation.

“It’s all ecology: our stomachs are very similar to roots the way we pick up nutrients and minerals,” said Daniel. “When we become deficient, we get sick just like plants do.”

Daniel completed an internship with a small sauerkraut manufacturing company in Oregon and decided to follow their model. He teamed up with fellow entrepreneur Noah Loin of Noah’s Raw Chocolate and fellow sustainable living student Jonathan Buzan and began experimenting with various recipes.

Daniel graduated in 2014 with a major in sustainable living and a minor in music. He appreciated the small class environment and the focus on a healthy lifestyle.

Bubbling Brine Brothers now produces three kinds of sauerkraut which they sell to grocery stores in southeast Iowa, including numerous Hy-Vees and Everybody’s Whole Foods in Fairfield. They use organic ingredients and source them locally during the growing season. The company recently started supplying the University of Iowa, and they hope to secure additional wholesale contracts.

“There is a paradigm shift to live foods and healthier organic foods,” said Daniel. “Everyone’s mind is changing from the industrialized foods system to local, quality food; that’s a big part of my motivation.”