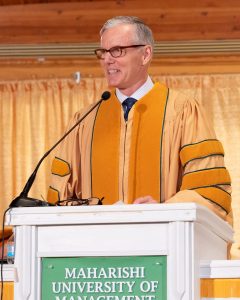 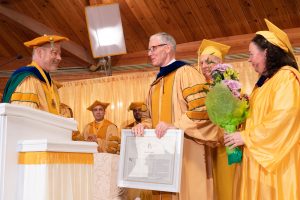 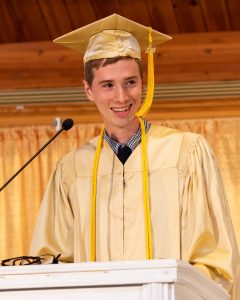 Maharishi University of Management held its 43rd graduation ceremony on June 23rd. 546 students from 49 countries received diplomas, including 62 undergraduates, 434 graduate students, and six doctoral students. Included in the total number of graduates were 50 students of the Maharishi Invincibility Institute in South Africa. They were awarded BA in management degrees by Dr. Chris Jones on behalf of the Board of MUM.

Dr. Gould has a long history of public service, including being a fellow of the National Academy of Public Administration and a fellow at the Mossavar-Rahmani Center for Business and Government, John F. Kennedy School of Government, Harvard University. Recently Dr. Gould has been working to make the Transcendental Meditation technique available to veterans who are suffering from alcohol and opiate addiction.

In his speech Dr. Gould offered a list of points on how to choose the right vocation. He said it is important to find something that involves one’s heart as well as something that aligns with one’s nature and talent. He also advised graduates to serve others and seek out new opportunities. “I want to invite you specifically to consider public service as a channel for your talent and creativity,” he said. “There is a great need for leaders in the public sector.”

Then he gave practical advice on how to succeed. He urged graduates to put others in front of themselves, express thanks and appreciation, choose their boss wisely, seek out gaps in the work environment that they can fill with their unique skill set, and continue learning.

“Class of 2018, you have arrived, in my view, just in time to solve the problems that a generation ago you could not,” said Dr. Gould. “Engaged in the right vocation and armed with your MUM education, you have a chance to change the world and live a life worth living.”

Watch the video of the graduation ceremony here.