Members of the MUM Student Government with Bob Roth and Michael Sternfeld of the David Lynch Foundation and Dr. Jeffrey Abramson chairman of the MUM Board of Trustees 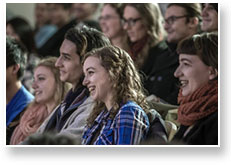 Dalby Hall filled with over 300 students 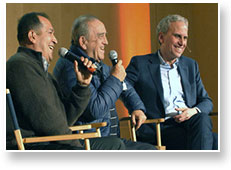 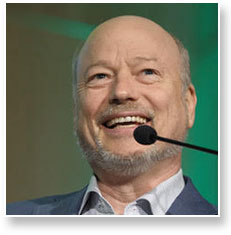 Last month MUM held the inaugural conference of ChangeMakers: Disruptors Transforming the World for Good. Hosted by MUM, the David Lynch Foundation, and the Abramson Center for Peace, the event was attended by 600 people, at least half of them students, who completely filled Dalby Hall.

MUM Student Government took a leading role in helping event producer Michael Sternfeld make the event more student-centered. They also launched ChangeMaking Month—a series of workshops, art displays, films, and an open mic. The series included a four-part workshop by Dylene Cymraes, an MUM student who is an experienced facilitator and the author of multiple books.

“The ChangeMakers Committee decided that weekly workshops directed toward helping students find their passion, mission, and action steps would help raise awareness of the big event weekend.” said Cris Evergreen, Student Body president. “We wanted to let students know that Student Government supports them in being the changemakers they want to be.”

In addition to listening to speakers like Father Gabriel Mejia, David Lynch, and Laura Dawn, students had the chance to interact with the guests during an afternoon round robin discussion. One of the highlights of the conference was David Lynch’s Skype call, which took the form of a Q&A session allowing students to ask him about exploring creativity and pursuing passion.

According to Karen Ballinger, Student Body vice president, students were inspired by the event, which immediately boosted participation in student activities and clubs, including the formation of new clubs and organizations such as the Growth of Consciousness Student Organization. One student, Corine Brooks, became so inspired by guest speaker Barry “Ra” Frye that she organized a successful follow-up visit for him and his youth group, Chicago Pride ROC.

Student Government is working with DLF on planning the next biannual event and hopes to contribute activities that will further increase active student engagement as well as showcase changemaking students.

Learn more about the speakers and watch the replay of the conference here.