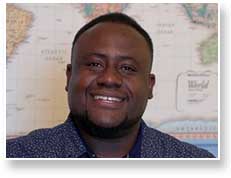 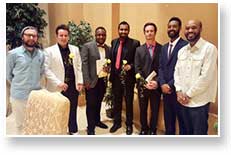 Graduating from the TM-Sidhi course

MUM student Carlton Ellis is the first student from the island country of Jamaica to attend the Computer Professionals program. Carlton holds a bachelor’s degree in management information systems from Montego Bay Community College and has over ten years’ experience working as a programmer.

In 2017 Carlton saw a Facebook ad for MUM’s ComPro program. He had been looking for a scholarship abroad to earn a master’s degree and gain some international work experience. He was attracted to MUM’s program because he was able to defer his tuition payment until after he secures an internship with a U.S. company.

Carlton had never heard about the Transcendental Meditation® program, but after extensive online research he decided to give it a try. He applied to MUM and arrived in August 2017.

“Before coming here, my blood pressure was continuously climbing to new highs, but it is normal now,” said Carlton. “I feel more refreshed when I meditate and more energetic. This is not just TM; it is the holistic life here at MUM.”

While taking the Science of Creative Intelligence® course during his first month, Carlton became intrigued by the research on brain integration through the TM® technique, and five months later he completed the TM-Sidhi® program. “Before I learned TM I didn’t know I could meditate for even five minutes, but now I meditate two times a day for 20 minutes and it feels normal; it has been great,” he said.

Carlton feels his coursework and campus routine have helped him prepare for the demands of his new professional life. “You have to stay on track with your courses because of the block system; it’s training us how to focus and be on time,” he said. Carlton has been optimistic about finding an internship because he sees a lot of opportunities in the IT industry in the U.S. He was right, as he recently found a position as software developer with Meetings and Events International in Chicago, Illinois.