Candice Rankin is a student with an eclectic mix of personal and professional backgrounds she can draw on in the BFA in creative writing program at MIU. She spent ten years pursuing acting in theater, television, and film, mostly in New York City, while attending various drama schools, including The American Academy of Dramatic Arts, the oldest acting school in America. 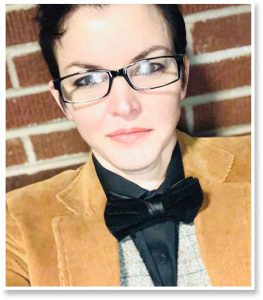 Although she enjoyed performing, she became disillusioned with the business and the tiring lifestyle and moved to rural Florida, where she started a house painting business. Later she moved her business to Los Angeles, where she successfully specialized in faux finish surfaces.

Candice also spent time traveling around the world. She backpacked in India for six months, studied fish in the remote glaciers of Alaska for three months, and hiked 370 miles of the Camino de Santiago, a medieval pilgrimage route from France to northern Spain.

While on a tai chi and kung fu retreat in a Buddhist monastery in China, she shared her journals with her roommate, who suggested she pursue creative writing. When researching writing programs she discovered MIU, liked the block system and the focus on personal development, and applied. “It’s been an incredible three and a half years—I am so glad I did it,” she said.

“MIU has a wonderful group of professors who really don’t inhibit or censor you and allow you to go as deep and vulnerable as you are willing to within yourself. It has been a healing, expressively fulfilling, and creative journey,” said Candice. She has also enjoyed sharing ideas and workshopping her work with fellow students in the writing program.

Candice says that the Transcendental Meditation® technique has facilitated her writing process: “TM supports your overall functioning, patience, and creativity, and allows deeper ideas to come to the surface.”

Her favorite genre is creative non-fiction, and she has been working on a humorous memoir based on her childhood experiences and relationships throughout her life. She is graduating in June 2021 and is in the process of applying to MFA writing programs around the country.