Ashia Fredeen–Using the Power of Storytelling to Evoke Emotions 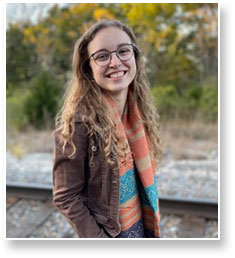 Ashia on the set of Heroes of Fairfield with (left to right) Jason Strong, director of photography; Tray Good, actor; and Dick DeAngelis, director (photo by Werner Elmker) 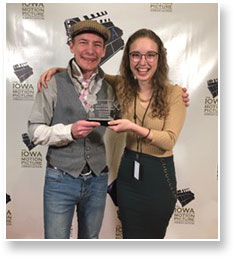 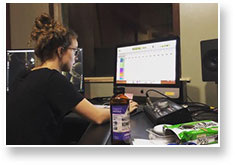 Working in the MUM sound studio

MUM student Ashia Fredeen grew up in British Columbia, Canada, and studied theater at Concordia University in Montreal. Although she grew up practicing the Transcendental Meditation® technique and had known about MUM most of her life, she hadn’t known about MUM’s Media and Communications Program. When she found out in 2017, she applied.

After taking her first film class, she fell in love with the medium. “It was challenging and very rewarding, and I really enjoyed how film connects with people’s emotions,” she said.

Ashia had only been in Fairfield for two months when she volunteered to help Dick DeAngelis on his second movie of the Fairfield History Series. Ashia worked after school serving as first assistant director for the entire length of the production (nine months).

During her second year Ashia started making her own short films, including a documentary short about local artist Chad Starling, called Words of Art, which won an award of achievement at the 2019 Iowa Motion Picture Association Awards.

Ashia is now working on her senior project, which is a documentary about an ayurvedic doctor. Her experience working on the Fairfield History Series has given her confidence to make her own documentaries. She has also gained a lot from MUM’s block system, which allows her to concentrate on developing and mastering essential cinematic skills.

“The elements of consciousness that my teachers bring into my film classes are also really profound,” she said. “We do learn the technical aspects of the craft, but we also talk about how creativity can be subtle, and how through the TM® and TM-Sidhi® programs we are able to connect with ourselves more deeply, and through that we are able to express ourselves more deeply and connect with our audience.”

Ashia’s dream is to tell stories that uplift people and elicit an emotional response, whether through documentaries or fiction.