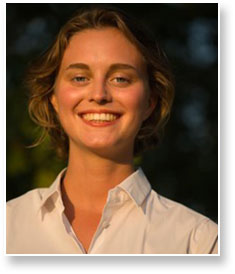 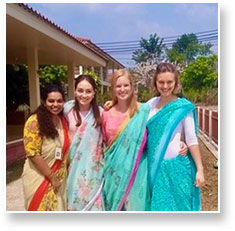 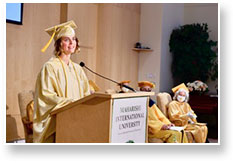 Speaking at the commencement ceremony

Alafair Turner arrived at MIU in August 2018 and, in less than two years, she learned the TM-Sidhi® program, became a teacher of the Transcendental Meditation® technique, and graduated as salutatorian.

A self-described seeker, Alafair was pursuing a major she designed at the University of Chicago aiming to answer the question: “What is the Self?” In her second year, she read Jack Forem’s 1973 book on the Transcendental Meditation technique, and a few weeks later she learned the TM® technique. She discovered MIU through her TM instructor and MIU alumna, Tegan Jung, and decided to transfer in search of a healthier lifestyle, supportive environment, and the true answer to her question.

At MIU Alafair completed an individualized BA in holistic life and a minor in Maharishi Vedic ScienceSM, with the Transcendental Meditation teacher training course as the final component of her degree. “A part of me knew the moment I learned TM that I wanted to become a teacher,” she said. “It was an instant recognition of a deeper value.”

Alafair completed the Transcendental Meditation teacher training course in Thailand and, after she returned in February 2020, she taught the TM technique at MIU; in Nashville, Tennessee; and in San Diego, California, before the centers had to temporarily close due to the COVID-19 pandemic.

For her next assignment she is joining the Heal the Healers Now initiative in Chicago, which provides the TM technique to frontline healthcare workers battling COVID-19. In addition, she is continuing her studies at MIU in the online MA in Maharishi Vedic Science program.

Alafair is grateful to the MIU community for the support, generosity, and inspiration she received while pursuing her goal of becoming a teacher of the TM technique. “Having learned the history of the Transcendental Meditation organization, to feel the enormity of the tradition keeps my awareness clear,” she said. “Knowing that now I am becoming part of this tradition, contributing to Maharishi’s vision and our collective goals, carrying the torch forward is the inspiration that flows through me every day,”.