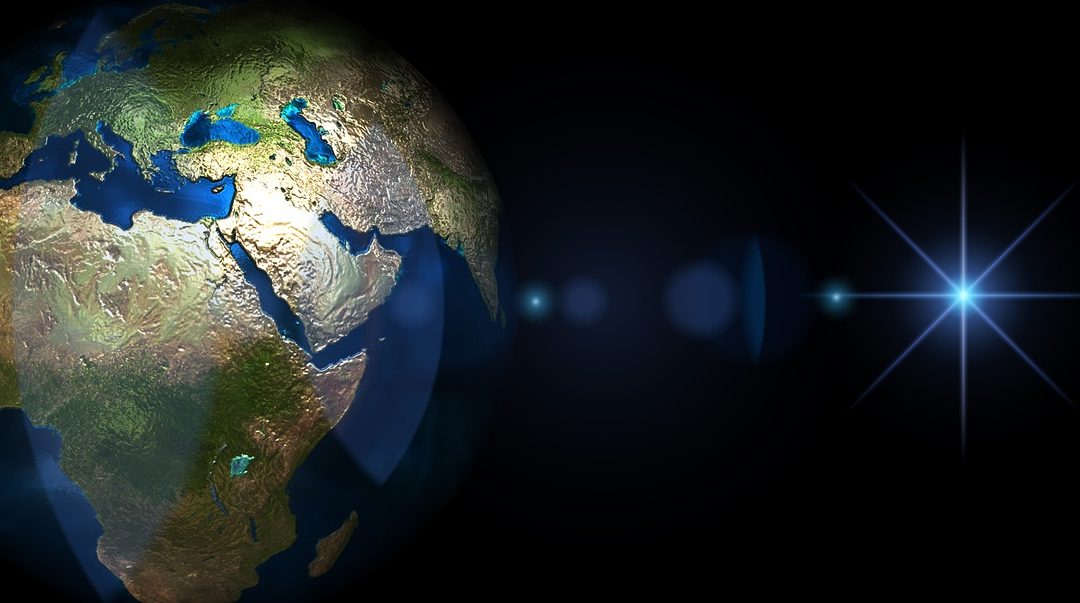 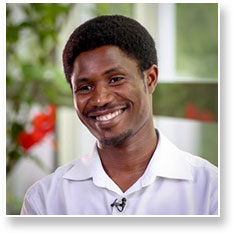 The five brothers from left to right: Idine Membere, Edwin Bwambale, Godwin Tusime, Harrison Thembo, and Cleave Masereka (Each son has a different surname, because in their culture surnames are given based upon the order of birth within a family.) 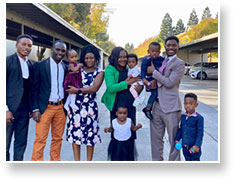 Harrison, Cleave, and Edwin with their families 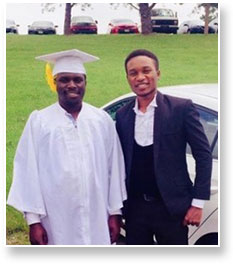 Cleave at his 2019 MIU graduation with Harrison

Edwin Bwambale is from the Bukonzo tribe in western Uganda and earned his MS in data communications and software engineering from Makerere University in 2013. He was working as a software developer in Uganda and wanted a low-cost high-quality master’s degree program in software development.

In 2016 he heard about MIU’s Computer Professionals Program and, after a friend of his joined, he enrolled in August 2016. When Edwin praised MIU to his parents in Uganda, they decided that all of their five sons should attend MIU.
“My parents were very loving and really inspired us to work hard and aim towards greater success,” he said. “Even when they were not rich, they created an environment that made us cultivate bigger ambitions. They consistently talked to us and mentored us even after we were out of university.”

Edwin graduated in 2018 and currently works at Microsoft. “Making the decision to join MIU is the best self-rewarding decision I have ever made in my life,” said Edwin. “It provided a conducive environment to pursue my education as well as prepared me to be able to deliver world-class performance in my career. What you can achieve with the MIU opportunity is only limited by your imagination. I can confidently say that it is one of the best professional programs I have ever seen or heard of.”

Edwin’s brother Cleave Masareka joined the ComPro Program in October 2016 and is now working for Apple. “ComPro is not just a master’s program, but a life-changing integrated course,” said Cleave. ”All my friends I studied with at MIU got good jobs and are all living happily.”

Their third brother, Harrison Thembo, joined the Accounting Professionals MBA program in 2019 and is currently completing his curricular practical training at Silicon Valley Financial Group. “I am now working with one of the best accounting firms in Silicon Valley as a staff accountant,” he said. “I never imagined that choosing MIU would be this fruitful and I am forever grateful for the Consciousness-Based education that this school provides.”

Two of Edwin’s brothers are still in Uganda. Idine Membere is planning to enroll in the Accounting MBA program in 2020, and Godwin Tusime is currently completing his bachelor’s degree in information technology and plants to join MIU afterwards. 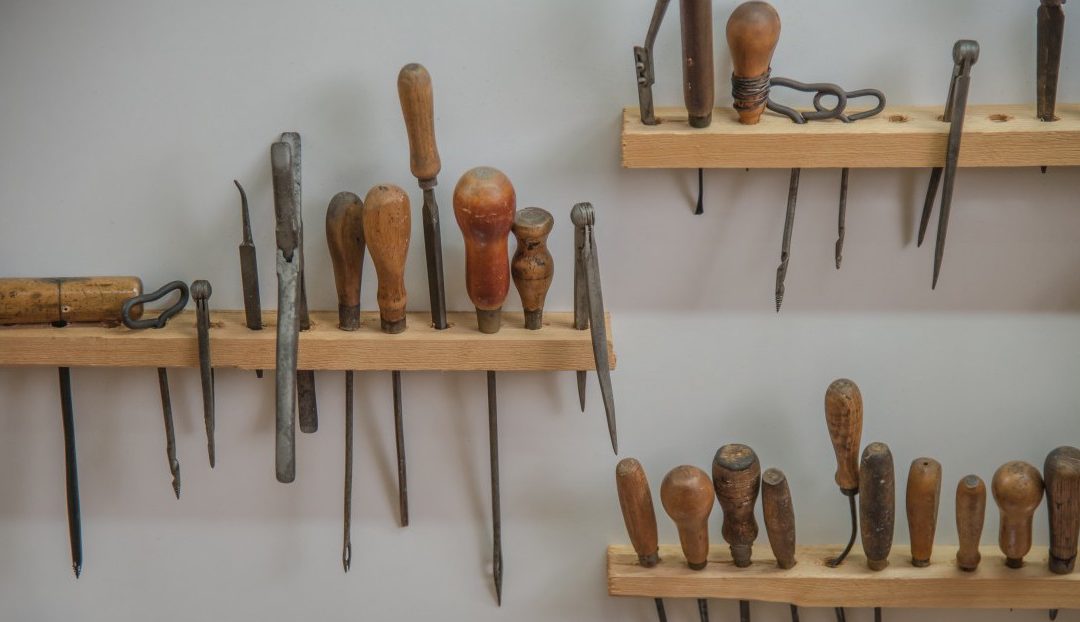 David Ford at the MIU MakerSpace 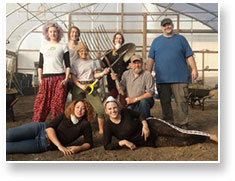 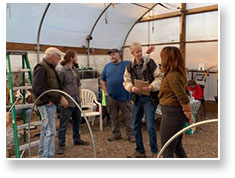 During an open house at the Oasis greenhouse 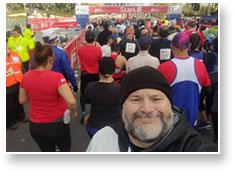 At the Chicago Marathon

MIU student David Ford is a paramedic who moved to Fairfield five years ago with his wife and three children. Last year, after 20 years in the health care field, he decided to make a career change and study sustainable living. When he learned that MIU had a degree program in sustainable living, he visited campus, talked to some of the students, and two weeks later enrolled.

David is a man of many talents and interests. He enjoys woodworking and metalworking and makes custom knives, axes, and jewelry, as well as homeopathic skin care products for men, which he sells on his website Mad Man Essentials.

In addition to studying full time, David runs the MIU MakerSpace workshop and helps maintain a local greenhouse, which he and his classmates restored and began operating during a three-month class in global solutions.

As a combat veteran of the US Navy, David had learned a form of guided meditation to help with his insomnia. Learning the Transcendental Meditation® technique has stabilized his life and changed the atmosphere of his home. “One of the first things I noticed was how TM affected my family life,” he said. “My kids can pick up on my anxiety, but with TM I don’t bring it home. My house is more tranquil and my kids are more relaxed.”

David doesn’t like to let limitations discourage him from taking on new challenges. Even though he describes himself as overweight and having a bad knee, last October he finished the Chicago Marathon with only five months of training. “You can always find a way of doing something,” he said.

Among David’s many interests are off-grid building, solar and wind energy, and tiny homes. He is considering a business idea for building small, sustainable homes for the local community. 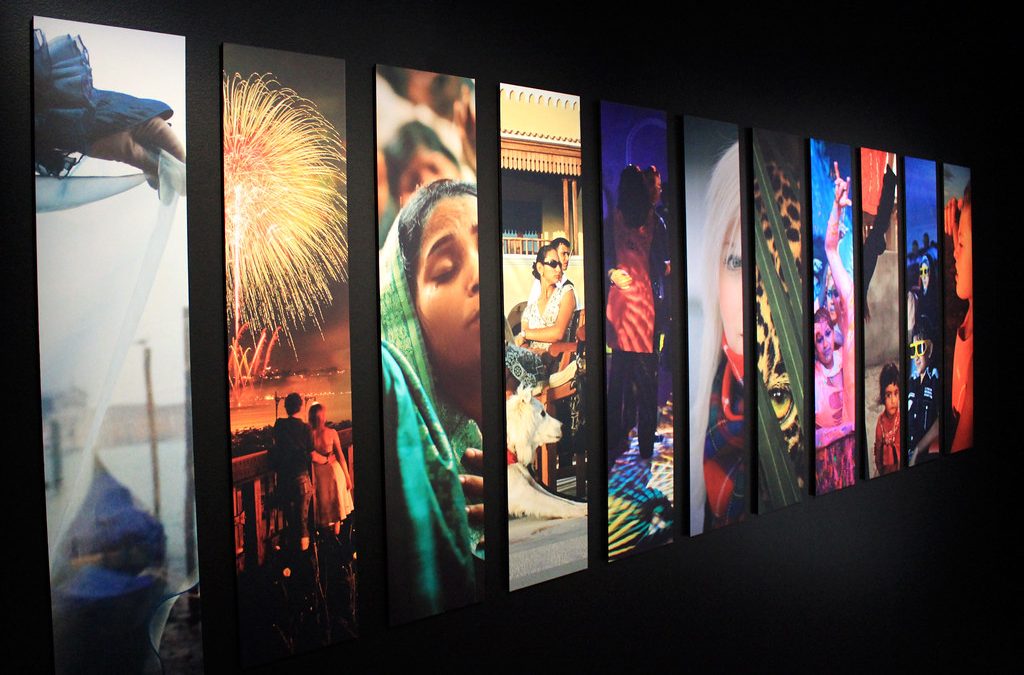 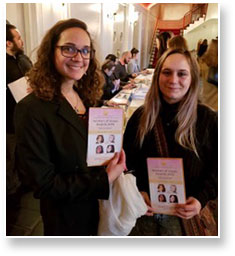 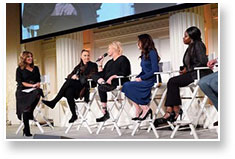 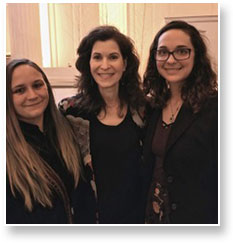 After the event with classical guitarist Sharon Isbin 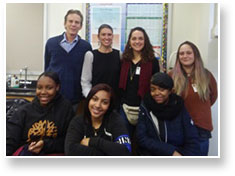 Two MIU students won all-expenses-paid trips to the Women of Vision Awards 2019 in New York City on December 3, hosted by the David Lynch Foundation. The event celebrated four women with vision who are transforming lives through their wisdom and compassion and helping to bring the Transcendental Meditation® program to vulnerable adults and children.

Students Jessica Mauro and Angel Thordsen were selected by MIU’s ChangeMakers committee, based on their participation in ChangeMakers events. Jessica is one of the most active students on Team ChangeMakers and has a work-study position handling marketing and graphic design. Angel is vice-president of MIU Student Government and served as a judge during a previous ChangeMakers essay contest.

The two students participated in the awards luncheon and afterwards had the opportunity to talk to the awardees. They also connected with multiple Grammy Award winner classical guitarist Sharon Isbin, who was the featured performer at the beginning of the event. The students invited her to visit MIU for a concert and residency in May 2020.

“Attending the Women of Vision event and meeting with young meditators helped me connect to deeper aspects of myself, realizing there is a smaller gap between me and my dreams, thus bringing my grand desires for changing the world into a more tangible reality,” said Jessica.

During their stay in New York City, Angel and Jessica visited a David Lynch Foundation Quiet Time program school in the Bronx and joined the students for a group practice of the TM® technique. In addition, they spoke to several seniors about their experiences at MIU and the value of Consciousness-BasedSM education.

“The Bronx high school students inspired me to make it a point for MIU to start reaching out to students and giving them the option and opportunity to come to our campus,” said Angel. She has already talked to MIU Admissions and the Board of Trustees about her plan to create a strong connection between MIU and the Bronx High School for Law and Community Service.

A week after they returned, Jessica and Angel shared the transformative impact of their experiences with fellow MIU students during a special recap celebration.