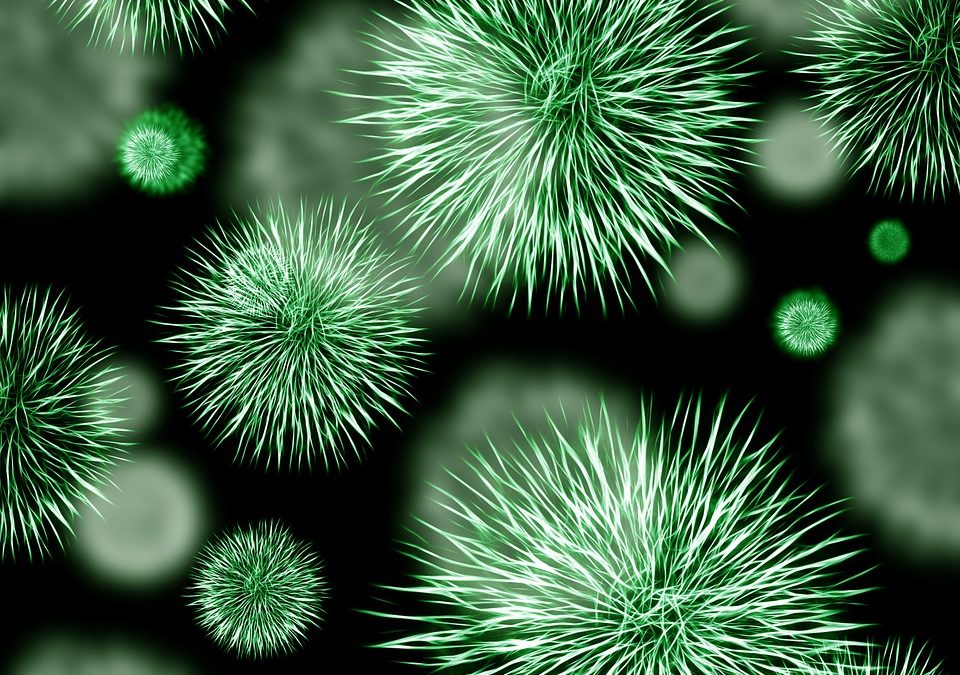 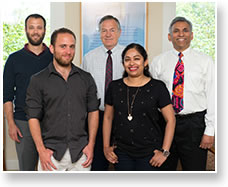 MBA students Tal Ron, German Servente, and Latha Lakshmanan, with Professors Dennis Heaton and Anil Maheshwari in the spring of 2017 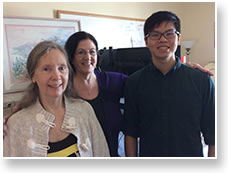 For several years, students in MUM’s MBA in Sustainable Business Program have been assisting local organizations with their sustainability efforts. Through their Capstone Project, MBA students have worked with the City of Fairfield, the Fairfield Arts and Convention Center, and several businesses by assessing their needs, conducting research, and making recommendations.

“We want students to learn and appreciate the community because we are teaching them about global citizenship and global leadership,” said Ayako Huang, assistant professor of management. “It’s important for them to learn that they are not working just for their own benefit. We want them to serve the community and we call it service learning. This differentiates MUM’s Sustainable MBA program from other MBA programs.”

Student Kenny Januar did an internship with Global ID’s human resource department to create a new performance management system and conduct a training needs analysis to increase the company’s effectiveness. “The advantage of working on the Capstone Project for me was to use the skills I obtained from the University to help local businesses and the community.”

Latha Lakshmanan surveyed customers of a local grocery store about their approach to sustainability. “The project at Everybody’s was a good opportunity to combine the current consumer trends in the grocery industry into viable experiments for the local store to try, based on successful benchmarking of larger stores in the greater Iowa area,” said Latha. “It was a good opportunity to learn about a new industry, understand the gaps, and provide recommendations.”

In addition to gaining hands-on experience, students can benefit from working in the community in multiple ways, including developing critical thinking, increasing understanding of the class topic, developing communication and leadership skills, improving flexibility and openness to change, and growing understanding of diverse cultures and communities. 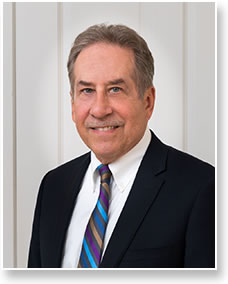 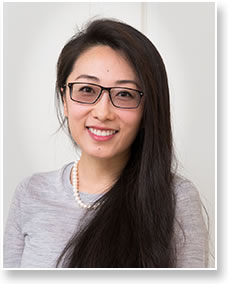 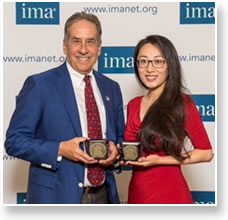 Dr. Bargerstock and Ms. Shi with their award at the IMA 2017 conference in Denver

Professor Andrew Bargerstock and PhD student Ye Shi won an award for writing the best article in the peer-reviewed journal Strategic Finance. They formally accepted the Lybrand Gold Medal Award at the annual conference of the Institute of Management Accountants (IMA) on June 20 in Denver, Colorado.

The IMA Lybrand Awards Committee determines the top three peer-reviewed articles based on their outstanding contributions to the accounting and finance literature, awarding gold, silver, and bronze medals.

Titled “Are We Leaning Away from Standard Costing? Reconciling Lean Accounting Theory and Practice,” the article appeared in June 2016, and it examines an inconsistency in lean accounting theory and practice.

Specifically, it examines U.S. manufacturers that continue to use standard costing even though they have adopted Toyota-style process-improvement techniques. According to Dr. Bargerstock, lean manufacturing is increasingly being adopted in the U.S., but research shows that when those companies don’t also adopt lean accounting, it results in waste and inefficiency. 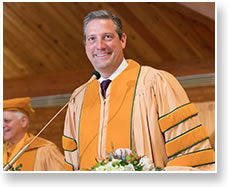 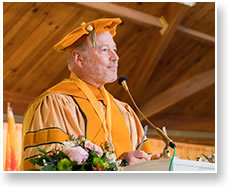 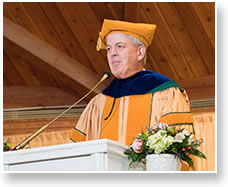 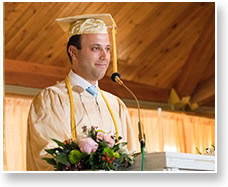 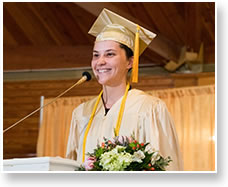 Maharishi University of Management celebrated its 42nd commencement on June 24, graduating 579 students, including 460 graduate students and 119 undergraduate students (48 from Maharishi Invincibility Institute in Johannesburg, South Africa)—the most in MUM’s history.

U.S. Congressman Tim Ryan from Ohio’s 13th District delivered the commencement address. Congressman Ryan has served eight consecutive terms in the House of Representatives since 2003 and has taken a national leadership role in improving access to healthcare, promoting ways to make college more affordable, and expanding renewable energy. He has also raised awareness about the benefits of the Transcendental Meditation technique® and is working to make it accessible to hundreds of thousands of veterans.

In his speech, Congressman Ryan challenged the graduates to find innovative solutions to the seemingly intractable problems facing the world by first developing the full creative potential of their consciousness. He then encouraged them to become leaders in creating an equitable economy, a prevention-based health care system, a sustainable environment, and to become promoters of peace.

“Graduates, we are living in a moment that calls out for you, because you are those rare positive disruptors—creative, open, smart, self-driven, resilient, fearless,” Congressman Ryan said. “You are the modern-day explorers. Your meditation practice will assist you in navigating the turbulent waters of modern society. Your Consciousness-Based education has prepared you to take your place among those leaders who are redefining the rules and changing the way we all see things. Our nation and the world desperately need you now.”

Congressman Ryan also urged graduates not to get distracted by the perpetual, and often divisive, noise of the media that can disconnect them from their environment, their neighbors, and themselves. ”We’ve become so in love with our distractions that we’ve forgotten one simple, important truth: underneath all the noise, we’re all the same.”

“On behalf of the entire Maharishi University of Management community, we are honored to celebrate your great achievements in government and your wise leadership in helping to create a healthier, happier, more peaceful and prosperous nation and world,” Dr. Hagelin said. “We know that you are at the beginning of a brilliant career of impactful leadership, with many far greater national and global achievements yet to come.”

Dr. Hagelin also announced MUM’s decision to join the American College & University Presidents’ Climate Leadership Commitment, which he signed on stage during the Commencement ceremonies. In addition to energy conservation and transition to a solar-powered campus, MUM is now prepared to offer its new Regenerative Organic Agriculture Program to farmers in the Midwest and throughout America, to re-stabilize the earth’s climate through cutting edge soil and agricultural science.

Watch a video of the graduation ceremonies here. 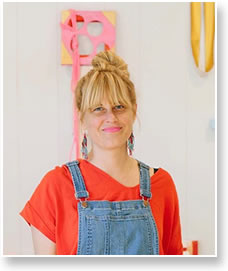 Gyan Shrosbree at the Yellow Door Gallery in Des Moines 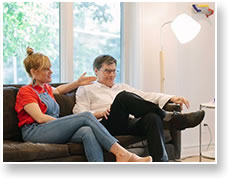 With her father, Jim Shrosbree, at their exhibit at the Yellow Door Gallery 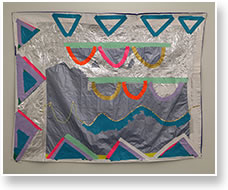 Art faculty member Gyan Shrosbree is cementing her reputation as an artist with a half-dozen individual and group shows around the country. Her work is currently on display through June at the Yellow Door Gallery in Des Moines along with works by her father, Jim Shrosbree, who is also an MUM faculty member.

Also showing through June is an exhibit at Grapefruits in Portland, Oregon. A group exhibit that includes her work is now on display through August at ArtStart in Rhinelander, Wisconsin. In addition, a group show will open in July at Western Exhibitions in Chicago.

Two solo exhibits coming up include one at Haus Collective in San Antonio, Texas, that will run September and October, and one at Ripon College in Ripon, Wisconsin, in November and December.

Ms. Shrosbree grew up in Fairfield and received her BFA degree from The Kansas City Art Institute in 1998 and her MFA degree from Cranbrook Academy of Art in 2000. She has exhibited in galleries all around the US and participated in numerous artist residency programs and fellowships.

While teaching at St. Philips College in San Antonio, Texas, Ms. Shrosbree became a guest teacher at MUM, and in 2011 she decided to move back to her hometown. “Working with the students is so different here,” she said. “You see them every day, you really get to know them, and you see their progress.” She is now assistant professor of painting and drawing and program director for the BFA track.

When she is teaching, it can be challenging to find time to work on her art, but Ms. Shrosbree tries to spend some time in her studio every day. The routine of returning to the studio daily, being engaged with the art consistently, and focusing on the creative process instead of its results is what has helped Ms. Shrosbree become a productive artist, and that is what she encourages her students to do.

She says that she has always valued her practice of the Transcendental Meditation® technique, and it helps her maintain a disciplined creative process. “I think TM is an amazing supplement for a sustainable studio practice, which is what we try to teach the students how to cultivate.”

You can find out more about Ms. Shrosbree and view her work here.