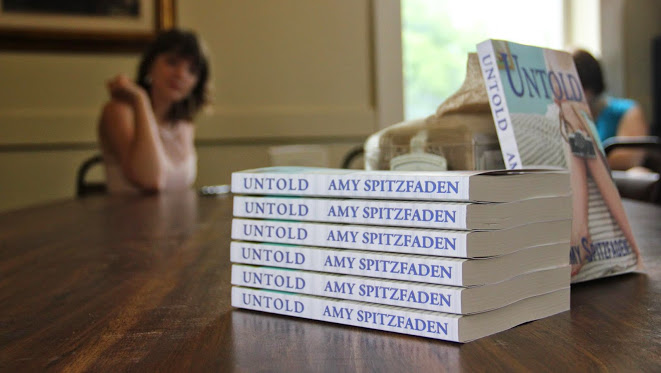 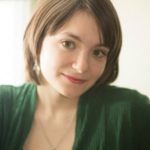 I got the idea for my novel in December 2011,” says Amy Spitzfaden, 23, who earned a literature degree from MUM the following year. “The first sentence came to me, and that’s what got me started. The protagonist feels she’s ‘missing’ someone but doesn’t remember who it is. I liked that concept, though I didn’t develop it at first.” 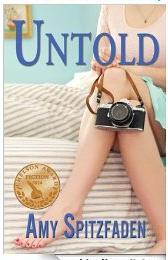 The story did gel over time. A key moment in what would become Amy’s first novel, Untold – winner of the Inkfingerz award 2013 – took place during a storytelling class given by MUM Media & Communications instructor Cullen Thomas.

“For homework we had to write a certain number of pages each night,” says Amy. “So I decided to start into the story. What was really helpful was that Cullen asked all these leading questions, like ‘Where is this missing feeling coming from? What happens then? What does the scenery look like?’ I thought about it all, and saw mountains and forests and trees, and before I knew it the book was starting to happen.”

Amy found much-needed support and writerly tools in MUM’s literature department, which prepared her to work through a full-length novel. Professor Nynke Passi “was amazing at teaching technique and giving guidance,” Amy says. “It’s such a respectful community. In a lot of writing classes you can get the feeling of competition. At MUM, everybody is so happy to listen to everybody else’s writing. I loved that.” 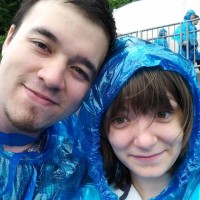 Amy’s book tour for Untold included a stop in Fairfield, Iowa, home of MUM, for readings as well as a radio interview on KRUU on the show Writers’ Voices. You can listen to the show here.

In 2013 Amy married Ravi Both, whom she met when both were students at MUM. Ravi, a native of Holland, works as a web developer and SEO expert, also at PSCS. 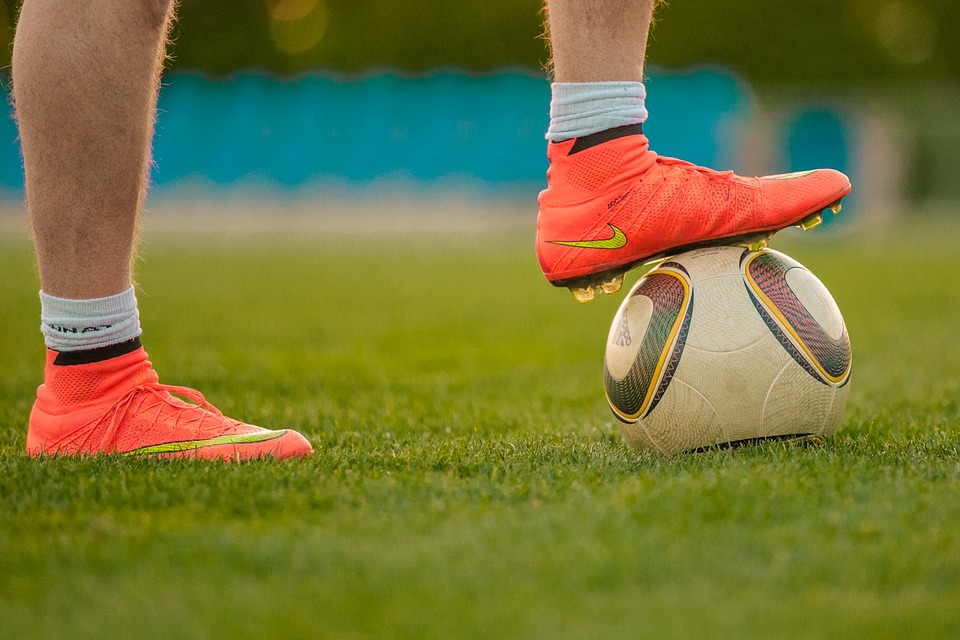 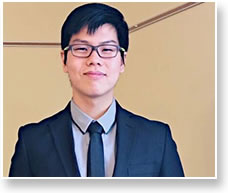 Indonesian student Kenny Januar grew up helping his father in his beverage manufacturing business. He never had a doubt that one day he too, would become a business owner, in spite of his high school counselors’ efforts to steer him towards the medical sciences.

Kenny attended Parahyangan Catholic University in Bandung, Indonesia, and graduated six months early with a bachelor’s degree in human resource management. During his senior year he attended a talk about MUM by alumnus Gde Brawishwara Putra, who talked about MUM. Kenny had aspirations to study in the US, so he visited the MUM website. He liked the idea of maintaining a balanced lifestyle while studying, so he applied to MUM’s sustainable MBA.

Now he appreciates the international community of students on campus and the ability to fit exercise into his daily routine. The practice of the Transcendental Meditation® technique also helps him stay balanced. “Usually I don’t rest at all besides sleeping,” said Kenny. “I always read or study. Now I have an extra 20 minutes to get rest and it helps clear my mind.”

Last fall Kenny took two courses in lean management, and the paper his team wrote about their process improvement project was selected for the Midwest Business Administration Association International Conference in Chicago this March. 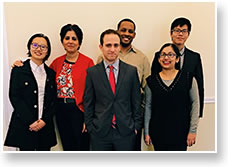 With professor Sabita Sawhney and students in the process improvement class

“In and outside of class, Kenny utilizes the lean principles of ‘continuous improvement’ and ‘respect for people’,” said Sabita Sawhney, assistant professor of management. “He is a solid individual, possessing both the intellect and work ethic necessary to attain much future success.”

In addition to his school work, Kenny has been preparing for his Associate Professional in Human Resources certification so that he can find a job in the US in human resource management. After gaining

After a soccer game at MUM

some work experience, he plans to return to Indonesia and start his own business.

In his free time, Kenny likes to travel and learn languages. He is already proficient in four and currently learning Japanese. He is graduating in June at age 22, becoming one of the youngest MBA graduates.

Monica at the Ourense International Film Festival, which is one of the 10 biggest film festivals in Spain

Brazilian filmmaker Monica Demes, who graduated from the David Lynch MFA in 2016, has been winning awards and gaining attention at international film festivals for the film she created while a student at MUM. 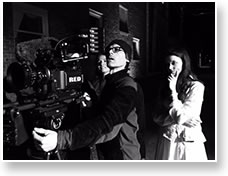 Lilith’s Awakening is a modern-day vampire story where the vampire is a symbol for women’s empowerment. The cast included MUM student Sophia Woodward as the protagonist and Brazilian pop singer Barbara Eugenia as Lilith. MFA student Gregor Kresal was the cinematographer. Monica gives much of the credit for her success to the David Lynch MFA. 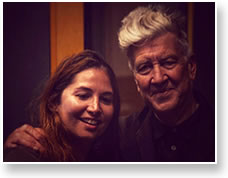 “I had full support of Professor Dorothy Rompalske when I was working on the screenplay and on the editing, as well as from Michael Barnard, the director of the program,” said Monica. “And I had great psychological support from program co-founder Joanna Plafsky. Of course the advice from David Lynch was also great.” 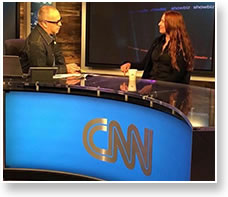 Being interviewed on CNN about Lilith’s Awakening

In spite of being a student film made with a very low budget, Lilith’s Awakening has been competing among the first line of professional horror and art films. Monica hopes to find distribution for the film after making the 2017 film festival rounds.

Monica also appreciates the personal growth she experienced while she was a student at MUM. “MUM had a great impact on my life, not only because I love Fairfield and the film reflects the love I felt for the Midwest, but also because Transcendental Meditation helped me in my creative process and in making me feel confident that I would accomplish my goal,” she said.

Monica is currently working on two screenplays – both are thrillers with women protagonists.